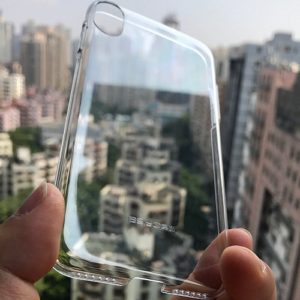 The iPhone 8 leaks and rumors stage has just reached the next level. Leakers have gone one step further and made the first iPhone 8 wannabe case public. A tweet tweet, by the already famous KK Sneak Leaks, was enough to start the frenzy. It pictures a cutout for the camera, which is oriented vertically, to match the leaked iPhone 8 renders shared by us, earlier this month.

The size of the case looks similar to the iPhone 7 dimensions, confirming that the upcoming iPhone 8 will have a similar shape with its predecessor. The increase in screen real estate should be facilitated by the almost total elimination of bezels. An important element is the Touch ID placement. Initial rumors state that Apple tries to embed it within the new OLED display, but several reports claim that the company has trouble in mastering this technology. This leaves the Cupertino-based engineers with two options. Either maintain a bottom bezel and use an iPhone 7-like fingerprint sensor, or move the Touch ID system towards the back of the phone. The designer of this iPhone 8 case doesn’t seem to fancy this option, as there is no round cutout anywhere on the back.

More iPhone 8 Details
What we know so far and most analyst agree upon is that The ‘iPhone 8’ or ‘iPhone Edition’ will surly feature an OLED screen, that will allow Apple designers to significantly reduce bezel size. They still have time to find a solution an embed the fingerprint sensor within the display.
Also, most analyst agree on the fact that the Dual Lens camera will be oriented vertically in the top left corner of the backside.
iOS 11 will surly be ready to give life to the hardware. So, the most important things that are left to be discovered is the material for the side and back-casing, as well as the Touch ID placement.

Fact: Stay connected and we’ll keep you up to date with the most recent iPhone 8 related findings.