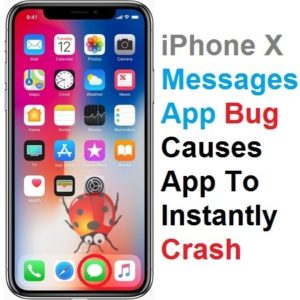 Apple’s revolutionary iPhone X has been officially launched today! The 10th anniversary iPhone is an impressive piece of technology and there is a strong positive vibe about the smartphone all around the world. Users love the new Face ID, Animoji, the edge-to-edge OLED display and the streamlined User Interface that works great even without the Home button. However, the first glitch has already surfaced! It’s seems that a series of users are experiencing an instant crash of the built-in Messages app, right after the new device is freshly configured and the user tries to open the application.

It’s unclear yet why the problem hits only a part of new iPhone X owners. It’s certain though that the bug surfaces when the device is set up from a backup and not configured as new. So, if you just bought an iPhone X and want to upgrade from another iPhone you might be prone to experience this annoying Messages app glitch that prevents you from using the app at all, including sending and reading messages!

Nevertheless, not all users that configure their iPhone X from an iTunes backup are affected. The issue has been first signaled by our German colleagues from iPhone-Ticker.de, but in the meantime we already received a few contact inquires that signaled the same issue. We’re currently inquiring for more details and will update this post as soon as new info is available.
Update 2: Apple’s support line recommends users to reset all settings after restoring the backup on the iPhone X. This is achieved from the iOS 11 Settings app. Browser for General -> Reset -> Reset All Settings. Now, try to open Messages and the app should work normally!

How To Solve The iPhone X Messages App Bug
Fix: At the moment the only solution is to set up the device as new and not from an older backup! Users have tried to hard restart the iPhone X to no avail. Some also attempted to open the Messages app with the help of Siri, with the same negative outcome.
The trick of asking a friend or relative to text you a new message with the hope that this might revive Messages, isn’t working either.

Update 1: Apple is now seeding iOS 11.2 Beta 2 exclusively for the iPhone X. Upgrade to it if your backup was done on the iOS 11.2 Beta 1! The device ships with iOS 11.0.1 pre-installed. Make sure that you upgrade to iOS 11.1 before you attempt to restore a backup. This could help you get rid of the Messages app crash!