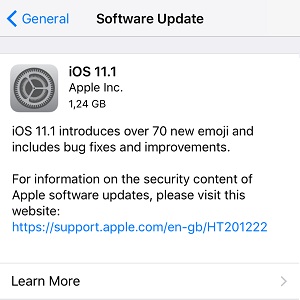 Apple has finally released iOS 11.1 to the general public after nearly five weeks of testing and five beta versions later. The first major iteration of the 11th iOS generation comes one day after the Cupertino-based tech giant has seeded the first iOS 11.2 Beta to its registered Developers and three days before the launch of the iPhone X.

iOS 11.1 has build number 15B93 and is available to all iOS 11 compatible iPhone, iPad and iPod touch models, 39 in total. It primarily focuses on bug fixes, like the Reachability patch or the 3D Touch multitasking gestures. It also brings performance improvements, but also adds over 70 new Unicode 10 emoji.

How To Update To iOS 11.1
iOS 11.1 is available over-the-air from the Settings app. Browse for General -> Software Update and tap on Download and Install once the firmware update is detected by your iPhone or iPad. Provide your device’s Passcode, agree with Apple’s terms and be patient until the new software version is downloaded and deployed on your iOS device. The iPhone / iPad will self-reboot before the installation process completes.
Tip: If you used your device to beta test iOS 11, you first have to delete the Beta Configuration Profile from the Settings (General -> Profile) app, force reboot your device, before your iPhone will be able to detect the official iOS 11.1 release!

iOS 11.1 Full Release Notes
The Software Update screen of the iOS 11.1 iteration mentions that 70 new emoji are added along bug fixes and improvements. However you can find the detailed release notes below:

Other Improvements and Fixes