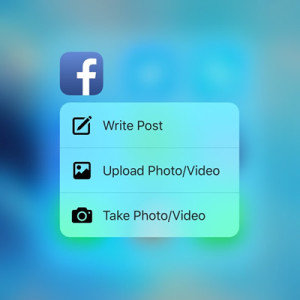 The popular social media company has just released an important App Store update for all iPhone 6S and 6S Plus owners. Facebook, for iOS, is now offering 3D Touch support for the latest iPhone flagships. This means that if you update to version 41.0 you’ll be able to use the Quick Actions menu available on the iOS home screen. Press firmly on Facebook’s icon and you’ll unveil a series of shortcuts which include: Take Photo/Video, Upload Photo/Video and Write Post.

Although there are no other 3D Touch specific actions available, like Peek and Pop within the actual Facebook app, I’m sure that the Californian-based social networking platform will include additional firm press options within upcoming updates. This release confirms Facebook’s trend of optimizing their app for iOS owners. A series of 4 updates within the last month has added functionality and a better user experience for Apple fans!

Update Facebook For 3D Touch
The only annoying feature is that the Zuckerberg-owned company continues to deliver default update info and announces only updates that have the role “to make our app better for you”, letting the user disocver the novelties while browsing the software. Click here to update or download Facebook for iOS on your iPhone, iPad or iPod Touch.

Facebook 3D Touch iPhone 6S Options
1. Take Photo/Video: allows you to firmly press on the Facebook home screen app icon and begin capturing media, which will be automatically shared it with your friends.
2. Upload Photo/Video: opens up the Photos app and allows you to select an already recorded clip or image that you wish to share on your Facebook timeline.
3. Write Post: redirects you to the Facebook status update screen where you can type “What’s on your mind?”, check-in, tag friends and much more!