How To Extend The Apple Watch Wake Screen Display Time 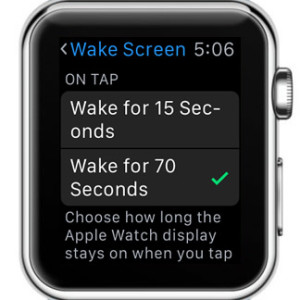 Your watchOS device is set, by default, to wake up when you perform a raise of your wrist. The opposite happens when you lower your hand and the Apple Watch goes into sleep mode, in order to save battery life. However, you can also light up your wearable’s screen by tapping it. This results in a 15-second light up time. The Watch’s display will automatically dimm after the predetermined time-frame, or you can manually darken it by covering the display with your hand. It’s the same gesture you’re using when muting an incoming call.

With watchOS 2 you can now extend the wake time of your Apple Watch display, when you tap it. You can choose between the default 15-second mark and the new 70-second interval. The longer time-frame is useful for example if you’re using your wrist-worn gadget as a rudimentary flashlight. For example, if you have to go to the bathroom or kitchen during the night and have to walk through pitch dark hallways and rooms you can tap your Apple Watch and use its display the get that minimum amount of light needed in order not the bump into obstacles. Here is when the 75-second wake time becomes helpful! 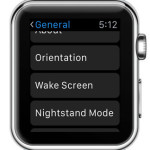 1. From Your Wrist
You can tweak this setting directly from your wearable, by pressing the Digital Crown to open the app bundle. Next, tap on the Settings app and scroll for General. Here tap on Wake Screen and turn the Digital Crown until you reach the last menu, called ON TAP. Select the Wake for 70 Seconds option and your Apple Watch display will remain ON for 1 minute and 10 seconds after you tap on it. If you finish sooner, cover the screen with your palm and the screen will be turned off instantly! 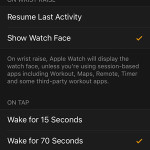 2. From Your iPhone
You can also change this setting from the iOS companion. Grab the paired iPhone and open the Apple Watch app. Browse the My Watch tab and tap on General and scroll for Wake Screen. Here you’ll find the same selections mentioned above.
Fact: Within the same settings menu you can also set up what the Apple Watch will display when you raise your wrist. You can pick between Watch Face and Resume Last Activity.
Tip: I suggest you to maintain the Wake Screen on Wrist Raise option enabled. Although you’ll sometimes experience accidental wake episodes, you’ll save more battery and have much more comfort in the long run!