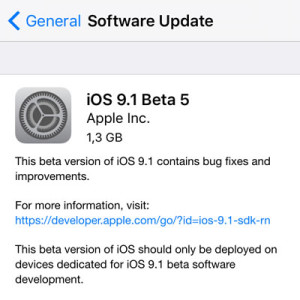 5 Days after the 4th iOS 9.1 test version became available for download, Apple has rolled out the Beta 5 firmware for developers and public beta testers. iOS 9.1 will be the first major release since the launch of the 9th iOS version, which took place less than 1 month ago, on September 16. It’s expect to reach the general audience towards the end of October, the latest, because that’s when the new Apple TV will be available for purchase. iOS 9.1 is needed in order to make iPhones and iPads compatible with the new TV system.

More, iOS 9.1 is also needed for the proper integration of the new iPad Pro with its main accessories the Smart Keyboard and the Apple Pencil. Up to date iOS devices are currently running 9.0.2, which is one of the two minor updates (9.0.1), provided within the opening month. Whether we will have a 9.0.3 release before the 9.1 is unclear yet, but you’ll be the first to find out if you stick with us here at iPhoneTricks.org! 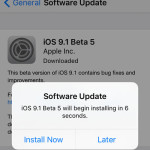 Apple’s version info doesn’t provide too many clues. It states the standard “This beta version of iOS 9.1 contains bug fixes and improvements” message. So, we have to explore and discover any changes by testing. After a few hours there doesn’t seem anything important to report, except a slight battery life improvement. However, I’ll update this article as soon as something else is uncovered. Nevertheless, if you haven’t checked the iOS 9.1 betas yet you have to know that besides compatibility updates the build also brings new features like: additional smileys including the middle finger emoji, Unicode 8, Show Contact Photos option, new wallpapers and much more. 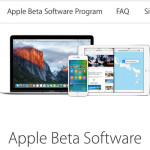 As mentioned above, this test version is available for both developers registered with Apple, as well as voluntary public testers. If you’re a coder you can download and install it via your developer account.
Else, if you’re not a programmer, but are curious enough to test the upcoming version before the general release, you can become a part of Apple’s public beta program. Click here to sign in. Tap on Enroll Your Device and download the iOS 9 Beta Software profile. Allow your iPhone to restart and then browse to Settings -> General -> Software Update. You’ll be able to download and install iOS 9.1 Beta 5 OTA!

Fact: In case your iPhone already runs a previous iOS 9.1 beta version you can easily update to the 5th test seed, over-the-air, by visiting the same Software Update menu within Settings!