How To Fix The iOS Unicode iMessage Crashing String 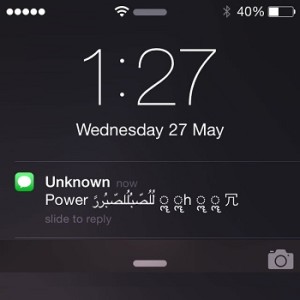 There’s a frenzy on all Apple related message boards, discussion forums and websites caused by the recently discovered malicious text message format, that when sent from an iPhone to another iPhone, via the iMessage feature, causes the receivers terminal to crash and restart out of the blue. The problem, if not fixed, locks out the user from the Messages app.
Edit: The “effective. Power [Arabic]” array can inflict damage even if received via Whatssap. Fortunately the Facebook-owned instant messaging app has received support for Share Extensions a little while ago and the problematic text can be tackled.

It seems that iOS is vulnerable to the text string, shown in the nearby image. The operating system has a bug that makes it unable to render the Unicode array, when it lands in as a Notification on lock screen, or as a drop-down alert. Depending on the situation, it causes the iPhone’s Springboard to mall function, Messages app becomes unavailable and/or the iOS device is force restarted. We’ve tested this bug and came up with a few solutions, to get you out of jail, in case you have a “friend” playing pranks on you. 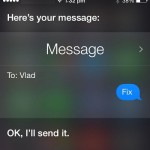 Apple will probably roll out an iOS update as soon as possible an tweak this error. It will probably be included in the iOS 8.4 version that is expected to be released anytime soon now. Until then we have a few tricks that will help you regain access to your Messages and get rid of the Unicode loop. You’ll be surprised how many “funny” contacts you have out there that will send you the iPhone jamming text message. Here is what to do:
1. Send A Reply
This solution works only if the Messages app was displaying the conversation thread of the person that sent you the error message. This way the banner Notifications are bypassed and you’re able to immediately send a reply and make sure that the Unicode string won’t go through an alert.
2. Receive Another Message
The following fixes are working, in the most likely scenario, that the Messages app was displaying the list view by the time the buggy text landed. In this case the app will crash when you try to open the thread in question. To solve the issue ask the offender, or anyone else nearby, to send you another normal Message, to brake the error loop.
3. Use Siri for Self-Texting
If you can’t find someone to help you out, you can fix your iPhone by sending yourself a text. If Siri is available wake her up and use the following syntax: “Send a message to myself!” followed by the “[message text]”. This way you’re able to regain control of the Messages app and delete the malicious text.
4. Send a Message via Share Sheet

If your iOS device isn’t connected at the Internet you can send yourself a message via the Share sheet feature. Open up the Photos app, select a picture and tap on the Share Extensions icon available in the bottom-left corner of the screen (the rectangle with an upwards-pointing arrow sticking out of it). Select Message from the list of Share options and select your own contact in the To: field. Tap send and an iMessage will land on your iPhone a few seconds later.
You can apply the same tick from the Notes app. After unlocking Messages, go ahead and delete the jamming text.
If you don’t want to erase the entire conversation with the person that sent you the offending message, send the photo to that contact. Afterwards access the conversation thread in question and delete the malicious iMessage.
5. Disable All Notifications 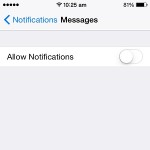 This option pretty much disturbs the activity of your entire iPhone. Because the bug lies in the iOS Notifications area, you’ll manage to escape unharmed, if you bypass the offending Unicode string by disabling Message notifications. Open the Settings app and browse to Notifications -> Messages. Tweak the Allow Notifications option and you’re safe. However, I do not recommend this fix because it will disable all text notifications, thus slowing your reaction time considerably, for engaging in important short message discussions. 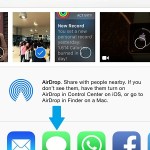 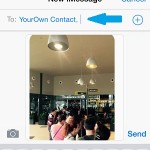 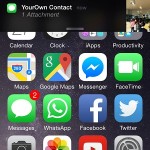 Edit: Apple has just published a temporary fix for this Notification rendering vulnerability and promises and iOS update to permanently fix this issue. 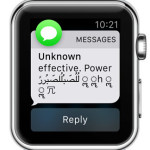 Fact: Apple Watch isn’t affected by this iOS vulnerability. The Watch seems to handle the malicious Unicode iMessage without any problems. You can even use it to annihilate the potential threat by instantly replying to the malicious iMessage. Turn the Digital Crown and tap on Reply. Tap whatever you wish, the f-word can be also justified if the prankster is insisting with this bad joke. Use Siri to input your reply or select a suggested text. After you send the text you can safely open Messages on iPhone and resume normal usage.

Block Repeating Message Offender
You might be able to understand this prank if a contact uses it once, but if he or she keeps sending the “effective. Power [Arabic String] ” several times, you should immediately block the offending phone number. Use the solutions provided above to fix the issue and then proceed with blocking to make sure that your iPhone won’t be crashed again by the same prankster.

The Malicious iOS Unicode Text String
If you’re looking to copy/paste the error causing text message array and send it to the next victim, you’ve landed in the wrong place. We don’t agree with these kind of pranks, that take advantage of an iOS vulnerability and thus won’t contribute to spreading out the code. Imagine that it could hamper a regular iPhone user for a few hours, thus wasting his precious time and preventing him from using the Messages app. Thank you for your understanding.