How To Get Extra Months Of Free Apple Arcade Subscription 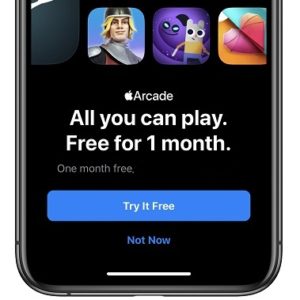 Apple Arcade is a video game subscription service launched by Apple in the fall of 2019. It’s available for iOS, iPadOS, macOS and tvOS devices. The service offers access to over 100 new and exclusive games for your iPhone, iPad, Mac and Apple TV. The fee is $4.99 month and you can test our Apple Arcade free of charge for one month.

If the initial trial did not convince you that this video gaming service is worth the money you can cancel it before the 30th day is over and you won’t be charged. The Apple Arcade free trial works the same as the Apple Music and the Apple News subscription trials. However, if you want to grab the service for a cheaper price or you’re simply a freebie collector there are a few tricks to get you some extra free Apple Arcade subscription months. 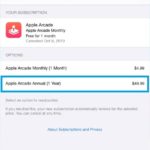 Apple currently sales Apple Arcade access for one year for the price of $49.99, that’s the equivalent of 10 months worth of $4,99 monthly subscription fee. Which means that if you pay upfront for 12 months of Apple Arcade gaming you get 2 months for free.
If you also count the initial trial month, you can end up collecting 3 free months of subscription, while offering yourself 13 months of uninterrupted access to the exclusive Apple Arcade Games. 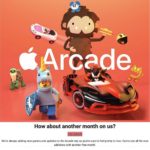 Get An Extra Month Off Free Apple Arcade

Similar to the Apple Music subscription, Apple has just started to offer an extra month of free trial to Apple Arcade users that already tried the gaming service.
To check if you’re among the lucky ones, you have to visit the App Store and tap on the Arcade tab, available in the bottom navigation menu.
The ‘How about another month from us?’ message will invite you to perform one more free trial of Apple Arcade.

It’s unclear for now if the extra free trial will be available for all users that already elapsed their initial trial, or just to a select range. Our tests and inquiries show that the first Apple IDs invited to the extra month of Apple Arcade free trial are those that tried out Apple’s video gaming service near the release date.

Fact: Time will tell if all users will get another free Apple Arcade month after a set time since their initial trial expired and they cancelled the subscription. Or, if Apple will only give a second chance to early Apple Arcade adopters that could not fully experience the power of the service because there have been less games available on release date.

Are you an Apple Arcade subscriber? Have you been invited to an extra month of free trial? Let us know the details in the comments section available below.

Related: Here is how to check all your App Store subscriptions and how to easily discontinue them to avoid recurring charges!