How To Play Videos On Apple Watch 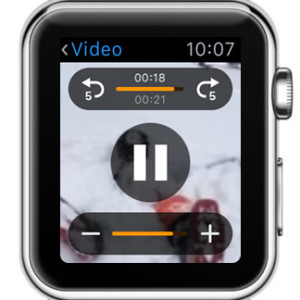 Playing a Video on Apple Watch!

Yes, you read the title right, your Watch OS device is able to render clips on it’s tiny display! This is no intentional misspelling or a clickbait article, because we here at iPhoneTricks.org only focus on valuable content, which aids Apple fans to better use and enjoy their mobile and wearable devices. “How can you watch a video on the Apple Watch?”, you might ask, while being aware that the Watch OS Photos app only handles pictures and that the iOS Youtube application hasn’t released a version to support the smartwatch, yet.

This is all true, but you might not know that Apple’s developers have coded the Watch to be able to play back videos received via iMessages. This means that you can watch a clip received within a notification. Videos can be recorded by one of your contacts and sent to you. In fact, the sender can attach any type of video, supported by the iPhone, within an iMessage, as long as it’s playable in the iOS Photos app. The movie doesn’t have to be recorded with the iPhone camera. It can be downloaded from Mail or synced from the computer! 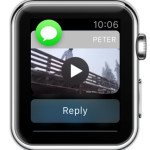 The taptic engine prompts you whenever a new text lands on your wrist gadget. If the message contains a video file, you’re prompted with the movie’s thumbnail and a Play button hovering over it. Tap it and the communication opens up, within the full Messages app. To render the clip hit the Play button once again and frames start to unfold on your Watch’s screen. Audio is played too, if available of course.
Tap the screen once again to unveil playback options. You can Pause/Resume video and even jump back or forward on the movie’s timeline. Volume can be adjusted from the controls displayed at the bottom of the screen.
Tip: Turn the Digital Crown to adjust Volume levels! 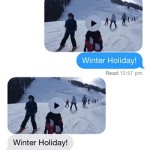 Knowing that you can receive videos on your wearable via the iMessage feature, allows you to sync movies from your iPhone to your Watch OS device.
The trick is to text yourself and videos will be uploaded to the smartwatch! Sending a video to your wrist is very simple. It works the same as sharing photos via iMessages.
Open the Messages app and tap on new text. Choose yourself as a recipient from the Contact‘s list and use the Camera icon available in the bottom-left corner to attach a video from your Photos‘ library. 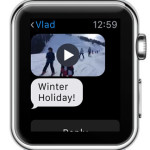 Tap Send and make sure that the Watch and its paired iPhone are connected.
The iMessage flies in on your wearable and the attached video remains available as long as you store the conversation in Messages.

Fact: Clips available within the Messages app, on your Apple Watch, are stored on the wearable. This means that they’re available for playback even if the smartwatch is in Airplane Mode or away from the iPhone’s range. You can also read about 10 more Watch features that work offline.