Fix For The iOS 11.1 Letter “i” Autocorrect Bug 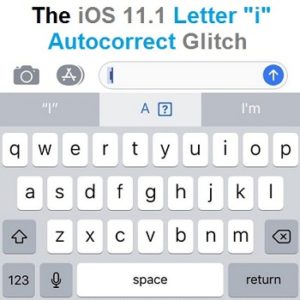 The iOS 11.1 letter “i” autocorrect problem.

Apple released iOS 11.1 earlier this week to patch a series of bugs affecting Reachability, multitasking via 3D Touch and many others. The new firmware also adds over 70 new Unicode 10 emojis. However, among an entire list of benefits it also squeezed a new glitch that affects typing on your iPhone and iPad. A series of users have experienced that when typing the letter “i” it autocorrects to an “A” with a symbol. If you’re using the iOS keyboard’s Auto-Correct tool this glitch is very annoying.

Nevertheless, the Cupertino-based tech giant has recently released a statement which provides a temporary fix for this inconvenient situation. All that you have to do is configure a keyboard typing shortcut to bypass the above mentioned typing bug. Apple confirms that the issue will be permanently fixed in an upcoming software update!

Update: iOS 11.1.1 has just been released to fix this Keyboard autocorrect bug as well as the ‘Hey Siri’ crashing glitch! 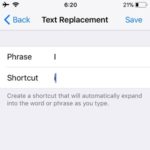 Fact: One other temporary fix works if you disable the keyboard’s Auto-Correct feature, at least until Apple solves the problem with a software update!

Last Updated on November 9, 2017 by Patricia