Posted in TILs, Errors and Issues by Patricia on October 4, 2022 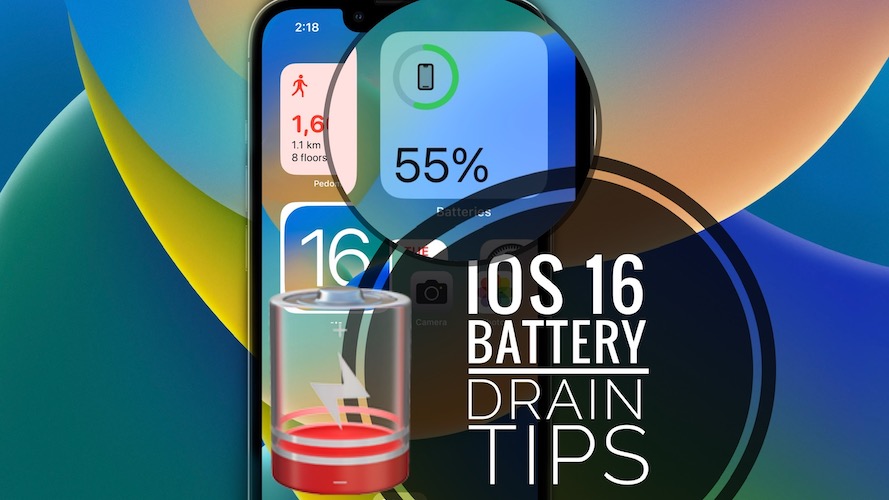 Are you experiencing severe iOS 16 battery drain after update? Issues persist even in iOS 16.0.2, several weeks after the initial release? Apple is due to patch these problems, but until then, you can apply the following battery saving tips!

Battery problems have been reported by several readers including Matt:

“Battery drain issue is still here and indexing must have been completed by now. Any suggestions?”

There are many other similar complaints on Reddit here and here:

Based on all the above mentioned reports, Apple will definitely have to fine tune iOS 16 battery performance in the upcoming iOS 16.0.3 and iOS 16.1 updates.

However, until Apple makes the OS more energy efficient, here are some recommendations to extend the battery life of iPhones running iOS 16.0 and later:

New features as haptic keyboard feedback during typing are additional battery drainers too. If you’re typing a lot you might wanna turn off this gimmick, at least until Apple patches other iOS 16 battery draining sources.

Kodiac informs that he managed to increase iPhone battery life in iOS 16 after he removed the Weather widget from Lock Screen.

Are you using one too? Use the Lock Screen editor to Customize it out from the widget section and let us know if you notice a difference in battery life!

Third-party apps that aren’t updated to support various iOS 16 changes can end up draining battery fast on your iPhone, because of accidental or unexpected background activity.

Tip: Check the App Store daily for new app updates and install them as soon as possible.

3. Turn Off Always On Display

iPhone 14 Pro and 14 Pro Max models come with a new Always On display feature that’s enabled by default. This is an additional battery drainer, especially with users reporting that the AOD is brighter than expected.

Tip: Fortunately, iOS 16 comes with the option to turn it Off. You can disable AOD in Settings -> Display & Brightness -> Always On (Turn Off)

iOS 16 battery drain is also caused by the improved Spotlight search which is able to suggest result from every app installed on your iPhone.

However, sometimes this is not necessary. You can reduce the battery strain caused by Spotlight search indexing, by eliminating a specific app from the results.

Third-party apps like Facebook have been reported to have abnormal background activity. To avoid this behavior, until the apps are updated to iOS 16 by they’re developers, you can temporary disable the permission in Settings -> General -> Background App Refresh.

Tip: You can turn Off the feature for all apps or just for some apps that are shown as intensive battery drainers in Settings -> Battery -> Battery Usage by App

Facebook: is one of the third-party apps that experience sever background activity when iPhone is connected to charger. Check out some tips to fix this issue here.

The stock Photos app has some new features including Duplicates. iOS 16 is able to scan your entire photo library and determine duplicate photos.

If you’re having a huge collection, it might take days if not weeks for iOS to map the entire library. According to Apple, the detection process is performed when iPhone is locked and connected to power.

Tip: A good idea if you want to limit iOS 16 battery drain in these early days. Is to keep your iPhone online and connected to power while you sleep, to help with photos indexing!

Last but not least you might be able to fix severe iOS 16 battery drain with a reboot. Various processes might glitch out and work continuously in the background.

A force restart will clear them out and at least temporary, stop the increased battery consumption.

How to: Press and quickly release Volume Up, followed by Volume Down and press & hold the Side Button until the Apple logo is displayed on the screen.

Have you managed to partially fix iOS 16 battery drain? Do you have other tips that we haven’t mentioned in this article? Don’t hesitate to share your feedback in the comments!