iPhone 8, iPhone X or iPhone Edition! How Will Be The 10th Anniversary Apple Flagship Named?

Posted in News by Patricia on September 2, 2017 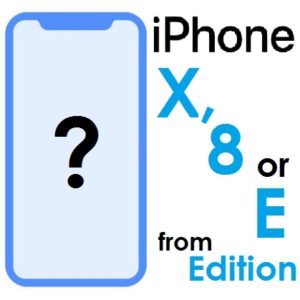 The 2017 iPhone models will soon be unveiled, more exactly on September 12, but it seems that a surprising turnaround is about to unfold. All the year, leaks and rumors have agreed that the 10th iPhone anniversary will be called the iPhone 8 and include a major redesign, with OLED edge-to-edge display, revolutionary Face recognition technology, intriguing split status bar, wireless charging and much more.

Later, two other iPhone models, containing the traditional minor hardware enhancements usually included in S-iterations have also been predicted. The LCD display terminals have been rumored with the anticipated call sign of iPhone 7S and iPhone 7S Plus. However, now, only a few days before the Steve Jobs Auditorium keynote, latest leaks coming from major Apple case manufacturers label the three upcoming iOS devices as: iPhone 8. iPhone 8 Plus and iPhone Edition! So, what to expect?

According to the latest leaks Apple’s marketing staff has decided to skip the iPhone 7S and iPhone 7S Plus iterations and name the two LCD devices iPhone 8 and iPhone 8 Plus. If this is true the new models should have a few significant improvements too. Or, Apple has decided to ditch the S denominations in order to keep up with Samsung’s Galaxy S count, that reached number 8 this year. The Android devices have received a new number each year and this is why they have caught up with the iPhones even if they have a shorter history.

Fact: This leaves the 10th anniversary iOS device with the iPhone Edition naming! What do you thing about it?

Other Options?
If the new OLED iPhone won’t be called iPhone 8, the two other denominations rumored are iPhone X and iPhone Edition. However, iPhone X, although it’s suitable to celebrate one decade of iPhones, will create confusion when the regular model reaches the iPhone 10 count. To avoid this Apple would need to skip the iPhone 9 and iPhone 10 naming and continue with iPhone 11 in 2018, which is highly unlikely. So, the only valid call sign remains the “Edition”.

iPhone E!
There is a precedent in Apple’s history with the iPhone SE, call sign coming from iPhone Special Edition. Could the 2017 anniversary iPhone be labeled as iPhone E, from iPHone Edition? What do you think about it? Is it appropriate? Do you have another suggestion?

Fact: No matter what the decision has been already made because Apple must be already have manufactured thousands of new iPhone models. We’ll have to wait and see. Stay tuned and follow our live blog iPhone 8 keynote!