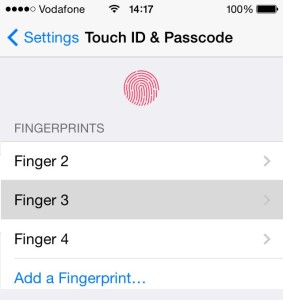 It’s a technology that seems to be borrowed from James Bond movies! These days you don’t have to be a spy or a secret service agent anymore to unlock devices with a fingerprint. Thanks to Apple’s latest innovation your iPhone has one more security level attached to it. I’m impressed by how accurate the fingerprint sensor really is and Apple really did a great job from the first implementation!

However, there are a few users claiming that they encounter problems with fingerprint recognition. In my opinion, the small issues that could arise are not caused by the iPhone’s Touch ID system, but are generated by the lack of experience of the user with the sensor. You might find it awkward the first few times, but once you get the glitch, there won’t be a problem with proper fingerprint recognition!

Touch ID Training
Here is a trick that will help you accommodate with Touch ID even faster. After adding one or several fingerprints to your iPhone you can return to the Touch ID & Passcode menu and train yourself for instant fingerprint recognition. Here is how to do it:
1. Tap Settings and hit Touch ID & Passcode.
2. Enter your Passcode and the menu will open.
3. Simply place your thumb or any finger that has a recorder fingerprint and you’ll notice that the field containing the specific “Finger No.” will light-up grey. This means that the sensor has successfully read your fingerprint!
4. Repeat this tip for several times until you get fully accustomed with Apple’s Touch ID reader!

iPhone Touch ID Video
Here is also a video that shows, in detail, how the above training method works. Please note that with the iOS 7.1 update, the Touch ID & Passcode menu is now directly available in Settings.

Conclusion
We strongly recommend you to use the Touch ID feature for both iPhone Unlock process and the iTunes & App Store confirmations. It’s an efficient security guard. In the same time it saves a lot of time, by sparring you from typing a passcode every time you wish to unlock your iPhone!