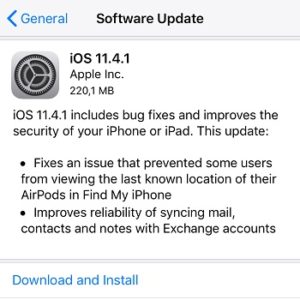 iOS 11.4.1 is the most recent official software update for iPhones and iPads released by Apple. Considering that we are only one month away from the public roll out of iOS 12, can we assume that this is the last software version of the 11th iOS generation. The answer is most likely, yes. Apple isn’t beta testing any future iOS 11 version and if nothing major happens, the next downloadable software update for your Apple smartphone will be iOS 12.

A potential iOS 11.4.2 version will only occur if an important security vulnerability or bug surfaces in these next few weeks until the release of September 12. A major bug would force Apple to quickly release a patch. As usual we encourage you to update your iPhone or iPad to the most recent available iOS version. You can even test iOS 12 as the public beta test program is in full swing!

How To: iOS 11.4.1 is downloadable over-the-air from your iPhone’s or iPad’s Settings app. All that you have to do is tap on General -> Software Update and hit the Download and Install label. Agree with the terms, provide your Passcode and be patient until the new software is deployed and available.