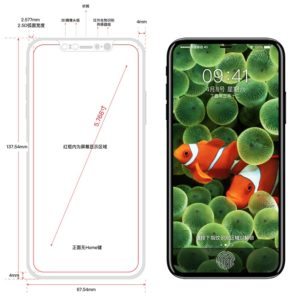 We’re less than 5 months away from the unveiling of the 10th iPhone generation and all predictions expect that it will bring a massive overhaul to Apple’s most famous device. We’re still in the rumors stage but specialist tend to agree on some of the important changes that we can expect with the upcoming iOS smartphone. Most of them have been reviewed by us since last October, including the iPhone 8 release date.

Considering that Samsung has recently unveiled the Galaxy S8 model, which is bezel-free on the left and right edges, and has minimal, non-display areas, at the top and the bottom of the screen, we expect Apple to catch up and to craft a bezel-free iPhone or something close to it. Nearby, you can check an iPhone 8 render that’s based on the desired Full Vision Display. You can notice that the physical Home button has been replaced by a digital Touch ID sensor to allow the display to reach all the way to the bottom of the device.

iPhone 8 Full Vision Render Review
The sketch indicates a minor 4mm bezel available all-around the display. The size of this new iPhone is predicted to be 137.54 mm tall and 67.54 mm wide. That’s close to the iPhone 7 dimensions 138.3 mm x 67.1 mm. Considering that bezels are removed, the actual screen real estate increases to an impressive 5.768-inch diagonal, compared to the 4.7 inches provided by the actual iOS flagship. The screen will be even bigger than the 5.5-inch iPhone 7 Plus display, while the total size of the phone will actually shrink a millimeter.

Fact: It’s uncertain yet if Apple will be able to embed the earpiece available at the top of the screen within the display. Along with it comes also the front-facing FaceTime camera, ambient light sensor, proximity sensor, microphone hole and a rumored 3D sensor. 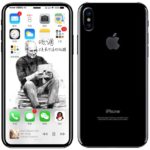 iPhone 8 Rear Side Render
The backside drawing features a major camera positioning change. The two lenses are now oriented vertically, with the LED flashes placed between the lenses. It seems that this adjustment, a bigger distance between the lenses, could help with AR (Augmnented Reality) and 3D features, two aspects that Apple wants to focus on in the upcoming feature.
Fact: This rear view render doesn’t feature a Touch ID sensor, denying rumors that the Cupertino-based tech company could move the finger print sensor towards the back of the phone.