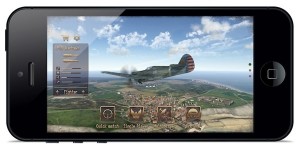 If you’re looking for a flight fight simulator for your iPhone 5s, Sky Gamblers: Storm Raiders should be your next Apple Store search! Atypical Games have created attractive and historic World War II combat missions, with detailed scenery, which are going to test your aerial combat skills! If you’re a dogfight nut you’re gonna love this game even if, after repeated playing, you’ll start to notice some flaws.

Storm Raiders has been updated with a new version which specially fits the new hardware possibilities of the latest Apple flagship, the iPhone 5s. If you play this game you’ll notice some impressive graphical effects, which include atmospheric dispersing during combat, roaring heat waves from your fighter’s engine, motion blur, surreal lightning details and much more.

The Sky Gamblers: Storm Raiders comes offers Single and Multiplayer modes. If you decide to play alone you can first practice your skills by opting for a “Free flight” and accustom yourself with flying a combat plane on your iPhone. You can next try the “Free for All” and “Last Man Standing” game play options which allow you to fight against multiple opponents, controlled by the software.
Once you improve your dogfighting skills you can start a “Campaign”, sign-up for real World War II “Dogfight Missions” or go on “Survival” mode. Other Single Player game play modes include “Capture the flag” assignments, “Defend the base” type missions or a dramatic “Team Deathmatch”.
The Online Multiplayer option completes the complexity of this game. You can play both dogfight missions as wells as team gameplay with other human players from all around the world. I have to underline that you can find a massive amount of online players ready to engage with you in aerial combats!

To convince yourself please watch the following video and experience the gameplay of SGSR:

– there is no real difference between planes, excepting the graphic one. They have similar flying properties as well as similar combat features.
– it would be nice to have more German, Japanese or Russian missions.
– many In-App purchase options.