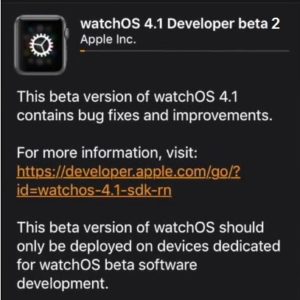 Apple has recently released the 2nd test version for the current watchOS version that’s being developed, known as 4.1. The inaugural beta, seeded two weeks ago, introduced a new built-in Radio app, a completely separate application from the Music one, which allows Apple Watch Series 3 owners to stream radio stations, on the move, with the help of carrier provided Internet, via the new LTE functionality.

More, the Music app available on Apple Watch Series 3 models, running watchOS 4.1, also gains access to the entire Apple Music library. This means that all LTE compatible AW owners can pick from tens of millions of songs when jogging, working out or relaxing with the help of the smartwatch. Getting back to watchOS 4.1 Beta 2, changes aren’t that spectacular any more. Nevertheless, this new test version brings a few Wi-Fi related changes.

watchOS 4.1 Beta 2 New Features
The current Apple Watch OS available is watchOS 4.0.1, which was seeded to patch a Wi-Fi connectivity bug that trapped Apple’s smartwatches in idle Wi-Fi networks, when users came near to public hotspots that require devices to pass a log-in webpage for web traffic to be generated. This prevented AW 3 devices with LTE to switch to cellular data connectivity. In watchOS 4.1 Beta 2 the following things change when it comes to Wi-Fi: 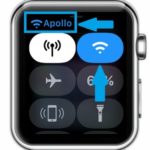 1. Wi-Fi Toggle: A new toggle is available in the Control Center of all Apple Watch Series 3 models with LTE support. This allows you to easily disconnect from a Wi-Fi hotspot and allow your wrist-worn device to connect to the Internet via cellular signal.
2. Wi-Fi Network Name: is now displayed in the top-right corner of the Control Center. This allows users to instantly know to which Wi-Fi SSID their gadget is connected too. If it’s not a trusted network one can quickly disconnect.

Info: Other changes uncovered in this 2nd Beta relate to the Radio app. A bug that prevented the ESPN station to play, has been fixed! More, important the Radio app can now actually stream via cellular data!

How To Update To watchOS 4.1 Beta 2
Apple seeds test versions of watchOS 4.1 only to registered developers. This means that you have to run an iOS 11.1 Developer beta on the paired iPhone in order to be able to receive Beta 2 on the Software Update screen of the Apple Watch app.
Learn here how to install iOS 11.1 Dev Beta on your iPhone. When this step is accomplished, open the Apple Watch app from the Home screen, switch for the My Watch tab and tap on General -> Software Update. Tap Download and Install and proceed as usual with the update process.