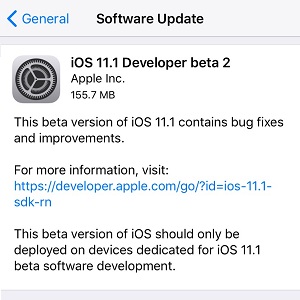 Apple has just seeded the 2nd test version of iOS 11.1 to Developers, almost two weeks after Beta 1 premiered. Differently from the first version, that focused only on bug fixes and improvements, Beta 2 adds numerous new Unicode 10 emojis, as Apple announced on Friday. More, the iOS 11.1 Beta 2 also brings back the 3D Touch gesture for multitasking to the iPhone and iPad. The feature was missing from the initial iOS 11 release and Apple confirmed that the App Switcher shortcut would be added later on, because of technical reasons.

iOS 11.1 Beta 2 is currently only available for Developers, but public beta testers will also receive access to a test version within the upcoming 24 hours. Update: iOS 11.1 Public beta 2 available now! If your iPhone or iPad runs a previous iOS 11 beta version, the new firmware is available over-the-air an can be downloaded from the Settings app as any other regular Software Update. If you’re running iOS 11.0.2 or any earlier public version, you have to download the iOS 11 Beta Profile on your device, before being able to grab Beta 2 over-the-air.

How To Update To iOS 11.1 Beta 2
For Developers: Paid Apple Developers have to signup in their respective accounts and download the iOS 11 Beta Profile. After that, simply open the Settings app and browse for General -> Software Update and install the new firmware as usual.
For Others: You can install iOS 11.1 Beta 2 on your iPhone or iPad before the public test version is released, even if you’re not an Apple Developer. All that you need to do is grab the iOS 11 Configuration Profile from a third party website. Use the step-by-step tutorial available here.

iOS 11.1 Beta 2 Features
Although the release notes on the Software Update screen states the classic “bug fixes and improvements” message, we have been able to detect the following changes coming with this release:
– Numerous new Unicode 10 emojis.
– 3D Touch shortcut for multitasking, via App Switcher.
– Reachability fix for a bug that caused the icons to overlap that dock on the Home screen.
– Camera app launch speed has been improved.
Updating: This list will be updated as soon as new changes are uncovered.