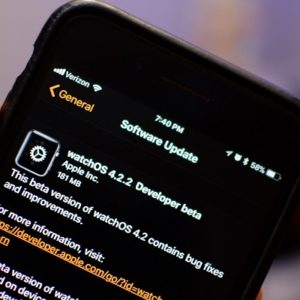 Yesterday was a busy day for Apple’s servers. Along the roll out of another minor iOS update labeled 11.2.1, that includes fixes for the HomeKit remote sharing problem and the iPhone X and iPhone 8 Camera autofocus bug, the Cupertino-based tech giant also seeded iOS 11.2.5 Developer beta and watchOS 4.2.2 Developer beta. Both are upcoming software updates. Considering that they’re labeled 11.x.x and 4.x.x don’t expect too many visible changes.

We’re most likely dealing with fine tuning of the iOS 11 and watchOS 4 operating system. The new betas are currently installed on our test devices and we will report back as soon as a significant change or new feature is spotted. If you want to test watchOS 4.2.2 yourself, you have to upgrade the paired iPhone first to iOS 11.2.5 and then look for a software update within the Apple Watch app. In the My Watch browse for General -> Software Update.

Requirements: Be aware that you need to have the Apple Watch connected to a charger and with battery levels over 50% for the install to work.

Why watchOS 4.2.2?
Apple has skipped watchOS 4.2.1 the same way it skipped iOS 11.2.2, iOS 11.2.3 and iOS 11.2.4 denominations, in case of the iPhone and iPad OS. This can be only explained by the fact that the Cupertino-based developers are making sure that they have room for maneuver in case a new unexpected bug surfaces and they have to release a software update to fix it, before the new betas complete the testing stages! Does this make sense? Share your thoughts in the comment section available below.