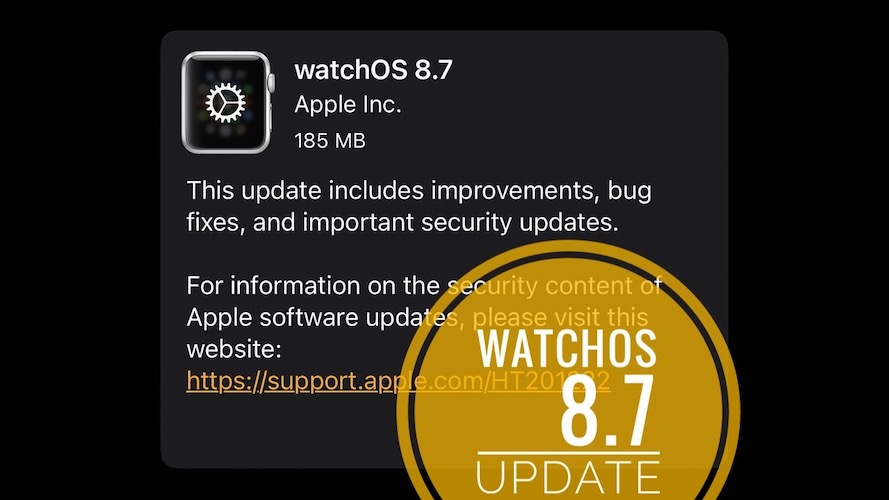 watchOS 8.7 build number 19U66 has been released with improvements, bug fixes and important security updates! It’s available over-the-air to all Apple Watches that are compatible with watchOS 8 (Series 3 and later) as long as the paired iPhone is updated to iOS 15.6!

watchOS 8.7 Should I Update?

We’re 10 days into this new version and you might want to know if it’s a good time to update or not.

I can only recommend you to keep reading and decide at the end of the article.

If you’re looking for a quick answer though, my advice is definitely, because the release comes with around 25 security updates which will make your Apple Watch a more secure device.

In terms of new features this release won’t make you to update. There’s literally no change mentioned by Apple in the release notes.

“Improvements” are the closest that can get to changes for this update. If you spot some don’t hesitate to mention them in the comments and we will update them here.

The watchOS 8.7 Developer update log is even more cynical:

“There are no new release notes for this software update.”

You can read all security updates in Apple’s security document over here.

Unlike iOS 15.6, bug fixes are only mentioned in the general description of this update and not detailed in the release notes.

So, if you notice any issues that have been fixed in this version share them with us in the comments and we’ll update them here:

New issues is the main factor why most users refrain from updating to a new watchOS version in the early days. There’s no significant bug that we could detect since updating to watchOS 8.7.

Nevertheless, if we’re missing out on something please report the problem in the comments! We will try to replicate and also publish it here in the main content of the article for better exposure!

Have you updated to watchOS 8.7? What’s your feedback? Use the comments and let us know!

6 Responses to watchOS 8.7 Should I Update? (Features, Security & More)