Posted in Accessories by Tyrone on April 9, 2015 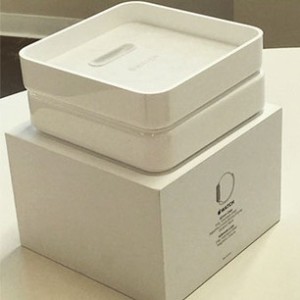 Apple Watch pre-orders start within 24 hours and here we are, just in time, to show you the first images from the gadgetr’s original packaging, that includes all accessories needed for using Apple’s revolutionary wrist-held device.

If you already have an idea about what cool features to expect from The Watch, you’ll also need to know what you get along with the actual device. This information is particularly helpful if you end up buying the Apple Watch from third parties and wanna make sure that you grab the full box.

The Watch’s packaging hasn’t been yet officially presented, by the Cupertino-based company, but we managed to grab over a dozen leaked photos for you! Some are provided by Jammy Gan on Instagram, while the rest come from trusted sources from Asia. The one nearby shows the gadget’s square-shaped box, with a similar texture & color as the iPhone 6 package! 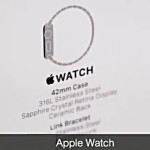 So, on the outside you should expect a cubic white box, with the Apple Watch logo and credentials printed on a facet. But what’s available on the inside? You’ll be surprised that there are quite a few accessories found within the smartwatch’s box!
Here is the description of all items displayed in the nearby image, picturing an unboxed Apple Watch:
1 & 2 – The inside casing looks like a white cube with rounded corners. It splits in two halves to reveal the Apple Watch. 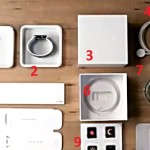 3 & 6 – The square white box which is practically the outside layer presented above. 3 represents the lid while 6 shows the bottom, which has a circular carving to accommodate the MagSafe charger and its adapter.
4 – MagSafe charging accessory. It’s a 1-meter long wire, similar to the iPhone’s lightning cable. It comes with a plug for a standard USB port or wall adapter at one end, and a round magnetic disc that attaches to the Apple Watch, at the other end.
5 & 8 – The gadget’s bands are found in these small boxes. 5 is the outer layer of packaging, while 8 expands with a socket for each detachable half of the band.
7 – is the wall adapter which connects, via an USB jack, with the MagSafe charging cable.
9 – The Apple Watch user’s manual.
10 – Display cleaning leather wipe to keep your smartwatch print-free. 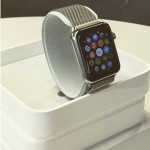 As you might already know this wrist-held device comes in three editions: sport, regular and luxury. Inform yourself which model suits you best and learn how to choose the Apple Watch that best suits your needs!
If the unboxing shown above convinced you to have this gadget on your wrist, be sure that it had the same effect on many other Apple fans. This is why you might wanna inform yourself how to be among the first that grabs this revolutionary device. There are some tips that lead to the fastest way of buying an Apple Watch!