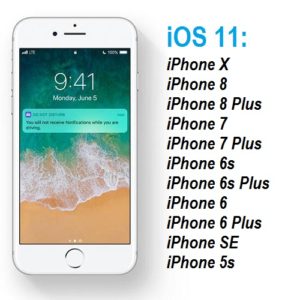 iOS 11 is a huge upgrade to the iPhone and iPad operating system. It brings a multitude of new features and functions starting with a configurable Control Center, the completely redesigned App Store, the game changing ARKit that opens the door for Augmented Reality on your iOS device and many more. However, not all these great additions are available on every iPhone model that’s compatible with the 11th iOS generation.

Because of hardware requirements and other limitations some features are left out on older iPhone models. Read on and find out the eight iOS 11 functions that aren’t available across all iPhone models. To give you a head start I can already let you know that the iPhone X is the only terminal that incorporates the full-feature lineup of the 11th iOS generation.

iOS 11 Compatible iPhones
As reported in June, right after the WWDC 2017 keynote the 11th iOS iteration can be installed on all iPhones with a 64-bit chipset. The first Apple smartphone that upgraded from the 32-bit support was the iPhone 5S. All later models are iOS 11 compatible. That’s a total of 11 smartphone models: iPhone 5S, iPhone SE, iPhone 6, iPhone 6 Plus, iPhone 6S, iPhone 6S Plus, iPhone 7, iPhone 7 Plus, iPhone 8, iPhone 8 Plus, iPhone X.

9 iOS 11 Features Not Available On All iPhones
1. Augmented Reality
Unfortunately, not all iPhones that can be upgraded to iOS 11 are receiving support for ARKit. Out of the 11 models the oldest 3 are left out. Because AR is requiring increased processing power only Apple devices equipped with an A9 chip or newer are able to augment the reality.
This means no AR for iPHone 5S, iPhone 6 and iPhone 6 Plus owners.

2. Portrait Lightning
The popular Portrait Mode introduced by iOS 10.1, that allows you to shoot pictures with the depth effect on the iPhone 7 Plus is upgraded to Portrait Lightning in iOS 11. This new feature allows iPhone 8 Plus and iPhone X users to adjust the lightning of a portrait photo before snapping the picture. Although you would think that the new addition is also available for the iPhone 7 Plus, it seems that only the A11 Bionic chip is able to handle the processing tasks required by this functionality. Also, a dual-camera hardware support is needed.

3. True Tone Display
This is a feature that iOS 11 makes available only to the 2017 iPhones, because of hardware limitations. True Tone Display is able to automatically adapt the color temperature of your smartphone’s display to fit to real-time ambient light conditions. This considerably reduces the strain on your eyes.

4. Wireless Charging
Is another iOS 11 feature that is obviously limited to the iPhone 8, iPhone 8 Plus and iPhone X models because they’re the only devices manufactured to feature cordless charging.

5. Apple Pay Cash
iOS 11 brings person to person money transfer option via iMessages, called Apple Pay Cash. This allows you to send personal payments to your iPhone and iPad contacts. Funds received are stored in your Apple Pay Cash card, a virtual debit card.
This feature is available to all iOS 11 supporting iPhones that come with built-in NFC hardware, thus are Apple Pay compatible. The only version that fails to clear the requirements is the iPhone 5S.

7. Animoji
The same state of the art camera hardware allow the iPhone X to be the only Apple smartphone that supports Animojis in iOS 11. Animojis are animated emojis that can recognize the facial expressions of the iPhone users and recreate them using the face of the emoji.

8. Face ID
Last but not least the main feature provided by the TrueDepth camera system embedded in the front of the iPhone X display is the facial recognition technology, which takes over all the functionality from the Touch ID, because of the disappearance of the physical Home Button.

9. Home Gestures
The same lack of Home button requires a new feature to be embedded in iOS 11 and available only to the 10th anniversary iPhone. Swipe up and down gestures from the iPhone X’s corners bring the user back to the Home screen, load the App Switcher and many more.