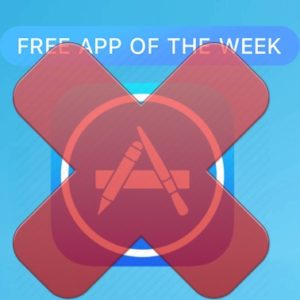 There aren’t only good news when it comes to the public release of iOS 11. The revamped App Store, included in the 11th iOS generation doesn’t have anymore plans for Apple’s trademark Free App of the Week campaign, that featured a premium app gone free. for 7 days, each Thursday. The redesigned App Store fails to include the next app gone free on September 21, while iPhones running the old App Store version aren’t showing any Free App of the Week promo anymore.

The last app gone free featured in the App Store was the paintball game INKS, which usually retails for $2.99 and was free for download between September 13 – 21. The Free App of the Week campaign kick-started on the 25th of May 2012 and featured the Cut the Rope: Experiments game as the first paid app that went free during this campaign. Now, more than 5 years later the promo seems to have been discontinued!

App of the Day & Game of the Day
It’s true that the iOS 11 App Store features two new campaigns labeled as App of the Day and Game of the Day. Curators are daily selecting a premium app and a game to be featured in these sections. However these applications aren’t discounted, nor going free while they’re featured. So, the Apps and Games of the Day are only highlighting the best performing software from the App Store. We’ve already covered a few editions here and here.

Free Apps of the Week
Until Apple decides to bring back the Free App of the Week campaign, we decided to move our weekly apps gone free Sunday column to fill up Thursday’s void, created by the above mentioned discontinuity. This means that all apps that are discounted or go free in the past week are collected and shared each Thursday or Friday.
Fact: If you’re an app developer make sure to share your promos with us at: contact@iphonetricks.org.