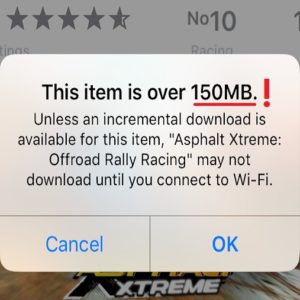 Most of us don’t even allow our iPhones to download or upgrade apps from the App Store when Wi-Fi connectivity isn’t available. That’s because Wi-Fi networks are very popular nowadays and Cellular data connectivity burns both extra battery and eats up on your carrier’s data plan. However, if you’re away from a wireless hotspot for a longer time and are eager to download a new App Store game, you’ll be happy to find out that Apple has increased the cellular app download limit from 100MB to 150MB!

This limit has been tweaked several times across the years. When the App Store premiered, in the summer of 2008, the limit was set to 20MB, simply because data connectivity wasn’t as advanced and carrier data plans were much smaller. Even apps in the App Store were much smaller when it comes to storage space requirements. However, as technology evolved iOS got more complex, applications received multiple new features and their size increased considerably. So did the carrier data networks and the traffic plans along with them. The download limit was first increased to 50MB in March 2012. One and a half year later, the cellular over-the-air App Store download limit was bumped to 100MB and now 4 years later it got an additional 50MB! 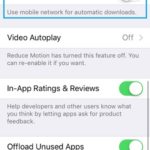 How To Enable/Disable App Store Cellular Downloads
As mentioned above it’s optional to allow your iPhone to grab or update apps OTA from the App Store, when there’s no Wi-Fi available. This feature can be tweaked by following the steps described below:
1. Open the Settings app from the iOS Home Screen.
2. Scroll for the iTunes & App Stores menu.
3. Activate the Use Mobile Data option, by tapping the knob next to its label.
Fact: This will allow your iPhone to download over-the-air, using the cellular data connectivity, both new apps as well as updates for the software that is already installed on your device. 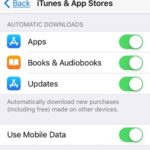 App Store Automatic Downloads & Updates
If your carrier’s data plan is generous enough, you can go one step further and allow your iPhone to perform automatic updates, whenever an app that’s installed on it, receives an update. More, you can allow your Apple smartphone to automatically download any app (free or paid), that is purchased on another iOS gadget linked to the same iTunes account.
How To: Enable Automatic Downloads from the same iTunes & App Stores settings menu.
Fact: Activating both auto downloads and mobile data usage will allow your iPhone to auto download and update any app within the 150 MB size limit, when Wi-Fi isn’t available.