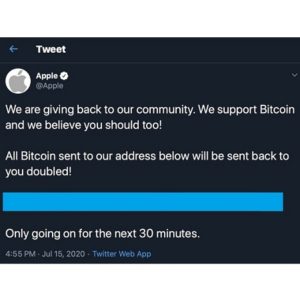 Apple’s Twitter account has just been hacked by scammers that are asking for Bitcoin! Allegedly the Cupertino-based tech giant has become a Bitcoin endorser. Not!
The hackers that impersonate Apple claim that they want to give back to the community and entice readers to send any amount of BTC to an anonymous digital wallet. They promise to return all transfers with double the amount of cryptocurrency. But, you have to hurry up because this offer is only available ‘for the next 30 minutes’!

This is obviously a blatant scam attempt that aims to steal your Bitcoin. Nobody should fall into it. Twitter has already deleted the fake Apple tweet but scammers that are controlling Apple’s account might continue to re-post it.

The same hackers have managed to compromise the Twitter accounts of some of the highest paid CEOs from the United States: Bill Gates (Microsoft CEO), Elon Musk (Tesla CEO), and Jeff Bezos (Amazon CEO).

Fact: Considering that this security vulnerability involves many high profile accounts leads us to conclude that the hackers are exploiting a Twitter security flaw.

Related: Do you know that you can fix compromised Keychain Passwords in iOS 14?