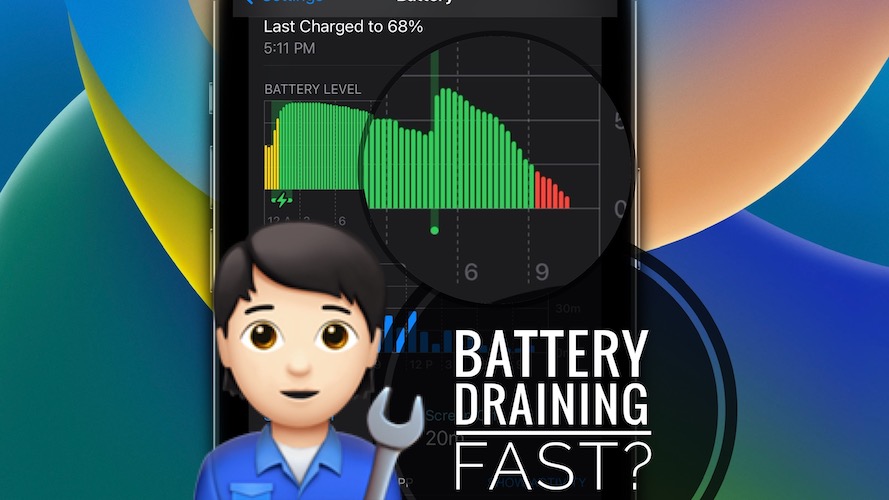 Battery draining fast on iPhone after iOS 16.1.1 update? Device has to be charged several times a day? Battery depleting heavily even during the night while Do Not Disturb is active? You’re not alone! We’ve got numerous complaints about this annoying issue.

This issue has been initially reported by Shika:

“I installed 16.1.1 and my battery is draining ever since and doesn’t last at all. It even drains at night while on do not disturb.”

In the last couple of days, we got several confirmations from:

We’re experiencing the same battery draining problems on devices updated to iOS 16.1.1 and have found plenty other similar complaints on:

Important: Before reporting a battery draining issue make sure that you wait 24 – 48 hours after the update. The new OS will reindex data on your device and this can leas to temporary accelerated battery usage.

If problems persists after this timeframe you can try the workarounds provided below.

Battery issues have been reported ever since the release of iOS 16! While some consider that iOS 16.1.1 is the worst release when it comes to battery management, there are other that praise their iPhone’s battery performance after the update.

On thing is certain, Apple definitely has to optimize the new OS. Until then ,you can use the following tips to fix extreme battery drain on iPhone:

A reboot could flush any lingering processes stuck after the update. Before, you apply any other troubleshooting steps you should preform a force restart.

How to: Click & release Volume Up, followed by Volume Down and press & hold the Side button until the Apple logo is displayed on the screen. Be patient until your device reboots, provide passcode when asked and resume usage.

Some users have reported huge Siri battery usage. If you’re experiencing the same in Settings -> Battery -> Battery usage by app do the following:

Fact: Siri might be indexing heavily after update. It might scan your photos for duplicates and more. If the situation persists 48 hours after installing iOS 16.1.1, you should try the above fixes.

One of the problematic widgets is the Weather widget. We’ve already covered that a Weather bug in iOS 16 is causing the app to update forecast with a significant delay.

We recommend you to remove all Lock Screen widgets for the time being and observe if screen time increases.

How to: Wake iPhone and touch & hold screen until the Lock Screen edit menu shows up. Tap Customize and remove widgets using the ‘–‘ symbol in the top-left corner of the item.

5G connectivity is burning extra battery especially when the signal strength is weak. Yesterday, I managed to lose 50% battery charge within 3 hours while having dinner in a location with poor cellular coverage. I barely used the phone.

Try to switch 5G completely off and let us know if you notice a difference:

Extra tip: If you spend more time in a location with poor carrier signal you can turn on Airplane Mode and enable Wifi and Bluetooth from Control Center. You shouldn’t miss calls as long as Wi-Fi calling is enabled!

If you can’t fix iOS 16.1.1 battery issues, your last option is to revert to a previous version!

iOS 16.1 is still signed, which means that you can downgrade without losing data if you consider that your iPhone’s battery performance was better with the previous version.

Have you managed to fix battery draining fast in iOS 16.1.1? Do you have a better solution? Share it in the comments and we will update it in this article.