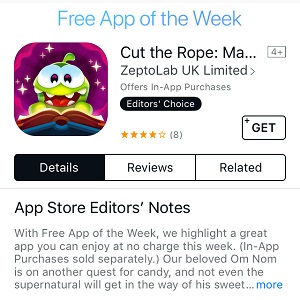 Cut the Rope: Magic – Free App of the Week.

The Cut the Rope franchise is close to reaching 1 million App Store downloads. Its most recent iteration, called Magic has been selected for the Free App of the Week campaign. This means that you can download this game, developed by ZeptoLab UK, for free, during the next 7 days. The App Store retail price of this software is $0.99. Magic comes with a fresh set of graphics, sound and gameplay elements.

Cut the Rope has been initially released on September 23, 2015. It was an instant hit and worldwide players loved the puzzles involving Om Nom and his candy rush. Cut the Rope 2 followed with a refined gameplay, new locations to explore and much more. Experiments and Time Travel are the other two iterations that followed. 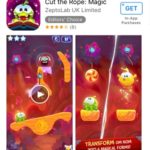 Download Cut the Rope: Magic
Tap on the print-screen available nearby, or hit this download link to grab this iOS game free of charge. Tap GET, followed by INSTALL and wait until the software is unpacked on your device.
Cut the Rope: Magic runs on both iPhone and iPad. It requires iOS 7.0 or later and around 193 MB of storage space. Hit OPEN or press the game’s icon available on the Home Screen, to start playing.
Fact: The average App Store rating for this game is 4.5 out of 5 stars. 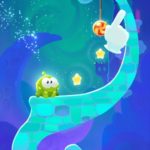 – All apps from this sequel require you to swipe on the screen to cut ropes that hold candies suspended and away from Om Nom’s mouth. To complete a level you have to help your little monster to recover and eat his much beloved candies. However, there are also stars in the scenario. Picking all of them increases your score
– The Magic iteration allows you to transform Om Nom into 6 different magical creatures and grab stars and candies more easily. For example you can bring him to Bird Form (to fly), Fish Form (dive for candies), Spirit Form (to pass through obstacles), Dragon Form (enables the sneeze weapon), Baby Form (to access narrow spaces) and Mouse Form (a better smell to uncover candies).

Fact: If you enjoy this sequel and want to play all episodes you can get the rest of the Cut the Rope games at a discounted price, by purchasing them in a bundle from the App Store. The Cut the Rope Value Pack is available for $2.99 and includes the Time Travel, Experiments and Cut the Rope 2 iOS games.