Posted in Apps or Games by Patricia on September 30, 2015 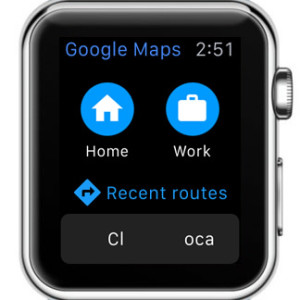 Google has just announced that it has updated its Google Maps app for iOS, with support for Apple Watch. This is only the 2nd App Store software, developed by the Internet giant, that can be downloaded on the watchOS gadget. It’s predecessor, the Google News & Weather application, became available right after the release of Apple’s revolutionary wearable. Google Maps is probably the best navigation app available on the market, with many iPhone fans preferring it over the native Maps app coded in Cupertino.

Nevertheless, Google has to do a little bit more in order to win the same amount of fans when it comes to the Apple Watch. Google Maps for watchOS isn’t as powerful as the iPhone app. It’s a simple version that works more as a companion, to the software running on the paired iPhone. Compared to the built-in Maps software, it comes with some important limitations, which include the absence of graphic maps, the possibility to search for a new directions and much more.

How To Install Google Maps on Apple Watch 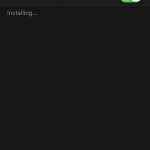 To run this software directly from your wrist, you have to first upgrade to the latest version from your iPhone. Tap on this download link and you’ll be redirected to the official Google Maps App Store page. Hit UPDATE or GET and then INSTALL if the software wasn’t installed already on your iOS device.
Next, if you have the Apple Watch automatic app download feature enabled, be patient as the iPhone will self-upload Google Maps on your wrist-worn gadget. Else, install it manually by opening the Apple Watch app on your iPhone. On the My Watch screen, scroll all the way down to the third-party app list and search for the Google Maps tab. Open it and toggle the knob next to the Show App on Apple Watch label, to the ON position. 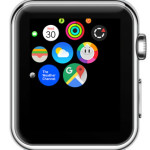 The software doesn’t come with Glance or Complication options. This means that you can access it from the apps home screen. Flick your wrist to wake the Apple Watch and press the Digital Crown. Now, scan the edges of the app bundle and tap on the Google Maps icon when you find it.
The app home screen provides three route options: Home, Work and Recent. By tapping any of the available selections you get step-by-step written directions to the locations marked as home and workplace on the iOS app. Recent Routes displays the previous navigation path. 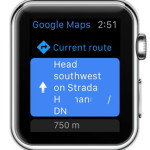 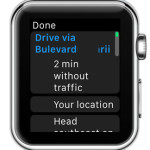 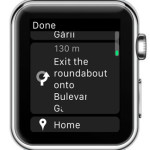 How To Set Home and Work Locations 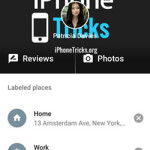 Grab your iPhone and open the Google Maps app. Make sure that you’re signed into your Google account. To log-in with your Google credentials tap on the Menu button available in the upper-left hand side of the screen. Do note, that you can log-in with multiple accounts and easily switch between them when needed.
From the same sidebar menu that slides in from the left side of the screen, tap on the Your places label. Choose Home and type your address. Next, pick Work and save your work location. That’s it, now you can open Google Maps on Apple Watch and you’ll get directions to reach your Work or Home from your current location.
Fact: Due to limitations, you have to revert back to the paired iPhone whenever you want to get directions for a route that isn’t predefined. However, you can continue to check your progress from the Apple Watch, as soon as you start navigation from your phone.