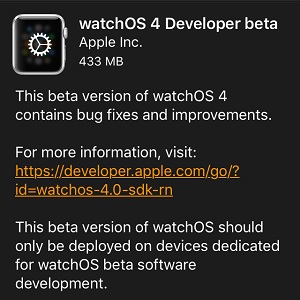 iOS 11 wasn’t the only upcoming software update that was introduced during the WWDC 2017 keynote. Apple has also shared with us watchOS 4, tvOS 11 and macOS High Sierra. The new iPhone, iPad, Apple Watch, Apple TV and Mac Operating Systems are scheduled for public release this fall, but they’re already available for beta testing. As usual, Developer’s are the first ones that get their hands on the new versions. However, there is a workaround and everyone can bypass this restriction.

As I already showed you right after the release iOS 11 Developer Beta can be installed on any compatible iPhone and iPad. Now, it’s time to learn how to install the watchOS 4 test version on your Apple Watch. You might think that running the iOS 11 Developer Beta will be enough to trigger the over-the-air Software Update function within the Apple Watch app and allow you to easily grab the associated watchOS 4 version. Things are not that straightforward though. You need to download and install the watchOS 4 Beta Profile on your Apple Watch before the update becomes available in the Software Update menu!

Important: Before installing Beta software versions on iPhone or Apple Watch make sure that you perform a full iTunes backup first, to prevent data loss. Test versions are unstable and devices could crash during the update process.

Mandatory: To be able to install watchOS 4 Beta on your Apple Watch you need to run iOS 11 Beta on the paired iPhone. Here is how to install it!

Fact: The only difference when installing watchOS 4 Beta with or without a Developer account is the way you grab the Beta Configuration Profile on your wrist-worn gadget. Paying Developers are able to download it from their account opened at the Apple Developer Website, while the rest have to grab the certificate from a third party website as described below!

How To Install watchOS 4 Developer Beta On Apple Watch
A. Download the Beta Profile 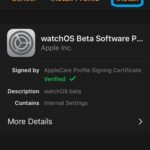 1. Using the paired iPhone open developer.apple.com website and log-in to your Apple Developer account.
2. Browse to the watchOS 4 download page and download the watchOS 4 beta Configuration Profile.
3. Select Apple Watch when you’re prompted to choose a device.
4. Tap Install to download the certificate and provide your Passcode to confirm.
5. Tap Install again to give your consent. Hit Install for a third time to unpack the profile.
6. When finished tap Restart to reboot your Apple Watch, and allow the changes to take effect. 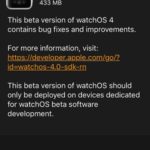 After installing the certificate you can proceed as usual and install the test version as any other public watchOS update:
7. Open the Apple Watch app on the paired iPhone and make sure that you’re on the My Watch tab.
8. Next, tap on General and browse for the Software Update menu.
9. Allow your device time to search for the Beta. Once it recognizes it tap on Download and Install to initiate the upgrade process.
10. Provide your iPhone Passcode and Agree with Apple’s terms.
11. Tap Install Now after the Beta is downloaded and be patient until the test version is unpacked on your wrist-worn device. 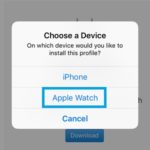 1. On the paired iPhone open this link: https://beta.applebetas.co/watchos within the stock Safari browser.
2. Tap Allow to provide permission for downloading the watchOS 4 beta certificate.
3. Tap on Apple Watch when prompted on which device you want to install the profile.
4. The Install Profile screen loads on your iPhone. Tap Install and provide your iPhone’s Passcode to confirm your action. 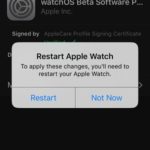 Fact: At this stage your iPhone and the paired Apple Watch have to be connected via Bluetooth and the wrist-worn device has to be unlocked.
5. Tap Install again to give your consent regarding Apple’s terms and tap Install for a third time to start the process.
6. Tap Restart, when prompted to reboot your watchOS device for changes to take effect.
7. After the Apple Watch reboots, hit Done on the Profile Installed screen that displays on the paired iPhone. 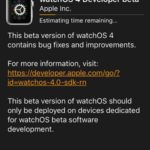 8. Open the Apple Watch app on your iPhone and make sure that you’re on the My Watch tab.
9. Tap on General and open the Software Update menu.
10. The watchOS 4 Developer beta version displays on your screen. Hit Download and Install to initiate the process.
11. Provide your iPhone’s Passcode and Agree with Apple’s terms.
12. Wait until the beta is downloaded and tap Install to unpack it on the Apple Watch.
Fact: Be patient until watchOS 4 is uploaded to your wrist-worn gadget. After the process the AW will automatically reboot!