How To Send Invisible Messages From iPhone and iPad 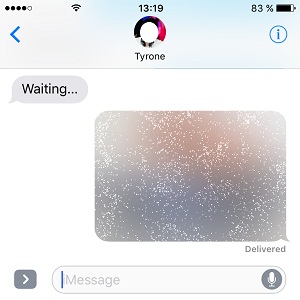 Starting with iOS 10, Apple device owners are able to send Invisible Ink texts via the stock Messages app. If you want to tease your Contacts you can hide the content of your message under a blurring bubble. The text will only be revealed to the receiver, if he rubs the message bubble with a finger. This is in essence a surprising and mysterious way of sending important news.

Las but not least, it’s also a way of hiding your message from third party eyes. The banner notification, on the receiver’s phone, won’t reveal any preview. So, if the iPhone is on a desk or in an other public place, people nearby won’t be able to peek at your incoming text because everything is hidden. This kind of data protection can be also achieved if the receiver has the Message Previews feature switched Off. However, previews are really helpful and with the help of Invisible Ink you can send only hide those key texts, instead of doing it for all message exchanges.

How To Send Invisible Messages 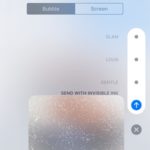 Now, that I convinced you that hidden texts are really useful here is how to send them.
Step 1: Open the Messages app and pick the conversation thread that you want to develop, or simply reply to an incoming notification.
Step 2: Type your content and before sending press & hold the upwards pointing arrow, colored blue (indicating that an iMessage will be sent), that you regularly use for dispatching the message.
Step 3: The Messages “Send with effect” screen opens up. In the bubble tab, tap the dot available next to Invisible Ink. It will instantly preview your hidden message.
Step 4: To dispatch the coded message tap the blue upwards pointing arrow that now replaces the dot, next to the Invisible Ink label. 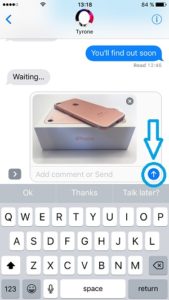 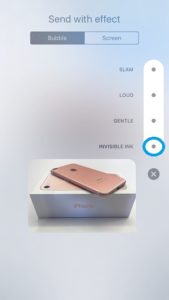 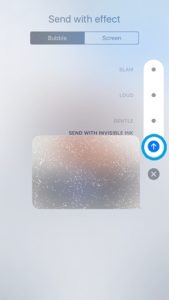 How To Read Invisible Messages 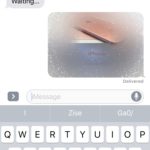 That’s it! The hidden message is dispatched. The bubble remains blurred at your end of the line too. If you tap it once, you partially remove the blur to get a sneak peek of the content. Rub the bubble to unveil the whole content. This is also what the receiver has to do too in order to decode your secret text.
Important: If the Reduce Motion option is active on your iPhone, the Invisible Ink effect as well as all other Message effects introduced with iOS 10 won’t work. Visit Settings -> General -> Accessibility -> Reduce Motion and deactivate to enjoy confetti, balloons, fireworks and other animations, automatically triggered by keywords.

Tip: Invisible Ink isn’t working with text only. You can hide photos and other type of media too.

Fact: Using your iPhone, iPad or iPod Touch to send messages with effect is only possible via iMessage. This means that the receiver has to own an Apple device that’s configured for FaceTime and iMessaging.