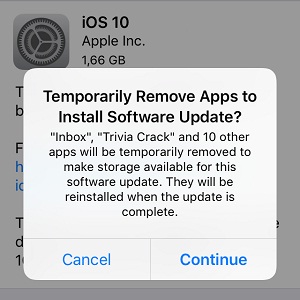 Insufficient storage space is a very common issue for iPhone users. The majority of Apple smartphones sold worldwide are the basic storage models. 16GB space is very low nowadays, considering that iOS alone needs a few gigabytes to deploy. Apps and media can easily bring you to a storage space crisis. So, what can you do if a new iOS version is available for ugrade, but you have only a few MB free. Major updates require up to 2 GB of storage space, while minor ones need anywhere from 100 MB to 500 MB.

Happily iOS is intelligent enough to recognize when there is not enough room on your iPhone to accommodate a new update. It can temporarily remove apps from your device to free up space until the update is installed. Deleted apps are then recovered and return back to normal functioning. This feature was first introduced during the release of iOS 9 and has new been fine tuned for iOS 10.

How To Temporarily Delete Apps To Install iOS Updates 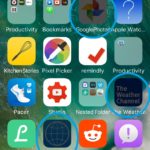 This feature is very simple because you’re only required to perform a tap and iOS will do everything for you.
Step 1: Start an Over-The-Air (OTA) iOS Update process by tapping Download and Install on the Settings -> General -> Software Update screen.
Step 2: IF there isn’t enough space on your iPhone, you’ll be prompted with a popup entitled “Temporarily Remove Apps to Install Software Update?”. You’re also informed about a couple of the applications in question and also about the total number of apps that will be deleted.
Step 3: Tap Continue to confirm that you accept the brief erasure.
Step 4: Be patient. Your iPhone first deletes the selected third party apps, downloads the new firmware, deploys it and at the end, installs back the temporarily removed apps.

Fact: Briefly deleted apps are fully restored, no data is lost. If you don’t check your Home screen, you won’t even notice which apps were briefly erased. App icons are dimmed on the Home screen while they are temporarily unavailable!