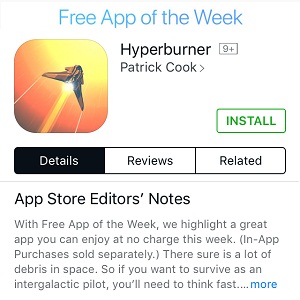 Hyperburner Free app of the Week!

Apple has just announced that Hyperburner is the app on sale during week 16 of 2017. The App of the Week campaign proposes, each week, a paid App Store application, that goes free of charge for the upcoming 7 days. It seems that the Cupertino-based tech giant is up to date with the most recent news and decided to celebrate NASA’s announcement that Saturn’s moon, Enceladus, could host alien life, by promoting a high-speed space flier app, in the popular discount campaign.

Hyperbuner, usually retailed for $2.99, is a spectacular, fast-paced sci-fi game, developed by Patrick Cook, that turns you into a virtual space pilot. It scores an impressive 4.5 out of 5 star rating on the App Store and is playable both in portrait and landscape mode. Fly a space ship at high speed through a distant solar system. Avoid obstacles to clear dangerous courses. Your progress unlocks higher performance ships, as you fly for endless-mode goals and complete difficult levels. 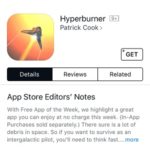 Download Hyperburner on iPhone & iPad
Tap the image available nearby to open the official App Store download page and grab Hyperburner free of charge. Hit on GET and then on INSTALL. Be patient until the software is unpacked on your iOS device. When ready, tap on OPEN and enjoy your new space pilot adventure game.
Fact: Hyperburner is optimized for iPhone 6 or later. We’ve successfully tested the game on a 5S model. However, older iOS devices might not provide a flawless gaming experience. 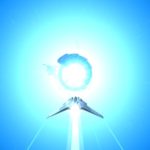 – Control the space craft by dragging your finger anywhere on the screen to steer.
– Adjust Turn Sensitivity and Camera angle (Ship, Cockpit, Trail) to improve your control.
– Clear six zones each of them containing 5 stages: Holosim Facility, Red Ore Colony & more.
– The game provides an unendless number of respawns. Practice makes perfect.
– New ships come with better shields and finer handling.
– Deflectors are part of the ship’s shield. They keep you airborne in case of minor collisions but need time to recharge after they’re used.
– Scoring is awarded per stage. A zone score is the sum of the five best endless records from the stages of that particular zone. Levels with higher difficulty award a higher score per distance traveled.
Tip: Score can be doubled by boosting starting speed and increasing the difficulty!

If you’re looking to grab other App Store sales click here and bookmark the page.