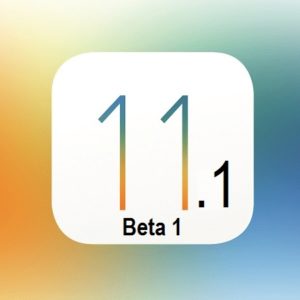 8 Days after releasing iOS 11 to the general public and one day after its first bug fixes and improvements update labeled as iOS 11.0.1, Apple has seeded the first beta of iOS 11.1. The software update is downloadable over-the-air for all iPhone and iPad owners that have the the iOS 11 Developer Beta profile installed on their devices. Else, you have to install the profile from your Developer account or from a direct download link provided below.

iOS 11.1 is expected to debut a series a features announced at WWDC 2017 but not included in the initial version. These are: Apple Pay Cash (the peer-to-peer Apple payments feature over iMessages), AirPlay 2 and iCloud support for Messages, as well as an improved Portrait Lightning feature for iPhone 8 Plus and iPhone X.

Install iOS 11.1 Beta 1 On iPhone
1. Open Settings from your iPhone’s Home screen and tap on General. Scroll for Profile and make sure that iOS 11 Beta Profile is installed on your device. If it isn’t download it using the info provided here.
2. With the Profile installed proceed with the traditional OTA upgrade. Tap on General -> Software Update.
3. Select Download and Install, provide your Passcode and Agree with Apple’s terms.
4. Wait until the new firmware is downloaded, deployed and your iPhone reboots. Use your Passcode once again and start toying with iOS 11.1!

Notes and Known Issues
ARKit
Known Issues
ContinuingfromabreakpointwhiledebugginganARSessionmayresultinVIObreaking. Any visual objects placed in the world/anchor are not visible. (31561202)

When using the TrueDepth front-facing camera on iPhone X, setting the capture device’s activeFormat to a binned video format (see AVCaptureDeviceFormat isVideoBinned) for capture and enabling delivery of camera calibration data causes the resulting AVCameraCalibrationData to contain invalid information for the intrinsicMatrix property. (34200225)

Storing data to a nondefault event store in EventKit may not work. (31335830)

Apps with a deployment target earlier than iOS 11 that subclass NSFileProviderExtension do not work on versions of iOS prior to 11. (34176623)

NSURLSession and NSURLConnection now load URLs correctly when the system is configured with certain PAC files. (32883776)

ClientsofNSURLSessionStreamTaskthatuseanon-secureconnectionfailtoconnect when an error occurs during PAC file evaluation and the system is configured for either Web Proxy Auto Discovery (WPAD) or Proxy Automatic Configuration (PAC). A PAC evaluation failure can occur when the PAC file contains invalid JavaScript or the HTTP host serving the PAC file is unreachable. (33609198)

Workaround: Use startSecureConnection to establish a secure connection.

Data from an external GPS accessory is now accurately reported. (34324743)

VNFaceLandmarkRegion2D is currently unavailable in Swift. (33191123)
Facial landmarks identified by the Vision framework may flicker in temporal use casessuch as video. (32406440)

Debugging a disabled Messages extension may cause the Messages app to crash. (33657938)Workaround: Enable the extension before starting the debug session.
After a simulated iOS device starts up, it’s not possible to pull down Cover Sheet.(33274699)

Workaround: Lock and unlock the simulated device and then reopen Home screen.