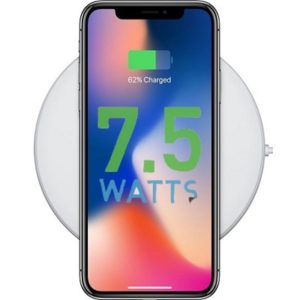 Starting with this year Apple has also adopted the wireless charging technology and made it available to its 2017 flagships. The iPhone X, iPhone 8 and iPhone 8 Plus have all been designed with a glass back that is ready to absorb power from a wireless charging pad. However, when the feature premiered in September the above mentioned devices were able to charge without a wire only at the rate of 5 watts, which is a a slow wireless charging speed.

Accessories: To be able to wirelessly charge your iPhone at the rate of 7.5W you obviously need a charging pad that’s able to provide this speed. Apple recommends two compatible accessories:
– Belkin Boost Up Wireless Charging Pad priced at $59.95 which works even with a 0.3mm case
– Mophie Wireless Charging Base which retails for the same $59.95 and also supports high-speed wireless charging.

Nevertheless, the fastest way to charge your iPhone X, iPhone and iPhone 8 Plus flagships is achieved, without a doubt, with the help of the new iOS fast charging feature, that allows users to use a 29W wired power adapter to juice up their Apple smartphones.

Fact: Apple has announced for 2018 the AirPower a wireless charging carpet. It will be able to simultaneously charge an iPhone, and Apple Watch and a pair of AirPods!

Related: You might also be interested in which car manufacturers include built-in wireless charging feature for the iPhone X, 8 and 8 Plus!