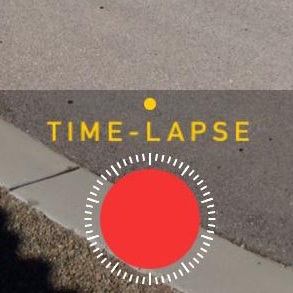 Yet another iOS 8 Camera app improvement, that is definitely worth mentioning, is the new Time-Lapse function. It comes in addition to the five previously available camera shooting modes (Photo, Video, Slow-Mo, Square and Pano) and provides the iPhone user the chance of creating spectacular videos that manage to contract time and render impressive masterpieces.

As in the case of the Camera Timer, time lapsing was available only with the help 3rd party apps like Hyperlapse. Now, a simple tap on the Camera icon and a switch for the time-lapse mode is enough to start recording.

Let’s take a closer look at this built-it Time-Lapse function and compare it with Instagram Hyperlapse.

How Does Time-Lapse Work?
According to Apple, this iOS 8 feature uses a ‘dynamically selected intervals’ option that automatically renders your capture, ensuring that time-lapses have a length between 20 and 40 seconds. This means that the software automatically adjusts the playback speed of your video, depending on the total length of it. The longer your capture is the faster it will play in order to fit in the 40 seconds time-frame.

How To Record a Time-Lapse
Capturing a Time-Lapse on your iPhone or iPad is identical with recording a normal video. You only have to swipe for the Time-Lapse mode and hit the record button. Tap it again when you finish and iOS automatically creates the time-lapse for you. The time-lapsed video is processed, saved and becomes accessible from the Photos app. It’s included in the ‘Videos’ and ‘Time-lapse’ albums.

Time-Lapse Processing Parameters
After performing several test I came up with some figures about how the ‘dynamically selected intervals’ feature works. Here are the parameters:

iOS 8 Time-Lapse Creation Tutorial
Here is a tutorial that shows you how to create a time-lapse with your iPhone. The actual capture took about 1 h and 10 minutes to record and iOS 8 created a 31 second long, 70 MB large, time-lapse video out of it.