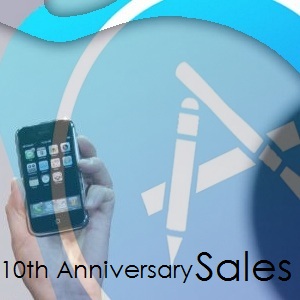 Ten years ago today, the first iPhone reached the shelves of Apple’s offline stores. At exactly 6pm, the first units were sold to customers that queued outside of the stores for several hours ahead of the launch time. Since then, the most popular smartphone on the market has been sold over a billion terminals. It has influenced the way all other smartphones have developed. iOS currently runs it’s highly improved 10th iteration, with iOS 11 already in the Beta testing phases and ready to launch this fall along with the 10th anniversary iPhone, also known as iPhone 8.

To mark this important anniversary, some iOS app developers have decided to provide sales and celebrate together with iPhone and iPad fans. Below you can find a collection with paid App Store apps that have gone free or are heavily discounted today and this week to commemorate 10 years since the first iPhone was sold. The list has just received it’s final update as we constantly received emails with more software gone free. Do share this page with friends and family and help us spread the word!

App Store Apps On Sale During 10th iPhone Anniversary
1. Intro to United States ( -> FREE) – Get to know the U.S. and its 50 states better. This is where the iPhone comes from!
2. Door Kickers ( -> $0.99) – An award winning SWAT-command quick tactics game famous on the PC and now available on your iPhone and iPad too.
3. Badland 2 ( -> $0.99) – Survive the world of Badland and have fun while playing this award winning iOS game.
4. DataMan Next ( -> FREE) – Track your data usage at a glance. Use the widget for easy access.
5. FTL: Faster Than Light ( -> $2.99) – This game is designed for iPad only. Control a spacecraft and try to save the galaxy.
6. Live Guitar ( -> FREE) – A great app for music professionals gone free for a limited time!
7. Broken Age ( -> $1.99) A puzzle-filled adventure game for the entire family!
8. SamCard Pro ( -> FREE) – A professional business card reader. Just snap a photo and your iPhone will collect and store all important data!
9. Demon’s Rise ( -> $0.99) – A turn-based strategy game for your iPhone and iPad that is severely discounted!
10. DMD Panorama ( -> FREE) – Shoot panoramas even with the front facing iPhone camera and watch a 3D view of your capture!
11. The Lonely Beast 123 ( -> FREE) – A great educational app that teaches little ones to count from 1 to 12!
12. Dungelot: Shattered Lands ( -> $0.99) – Embark on a mission to defeat zombie cows, giant evil mushrooms, and other similar opponents!
13. Spoiler Alert ( -> FREE) – Are you ready to play the story of a game backwards? Try this intriguing adventure!
14. Party Hard Go ( -> $0.99) – Go after disturbing neighbors. Instead of calling the police when they’re too loud you want to solve the issue with your own hands!
15. Uzu – A generative Design ( -> FREE) – An entertainment app that will surly come in hand for the 4th of July celebrations!
16. Pixomatic ( -> $1.99) – A desktop level photo editing app for your iPhone and iPad.
17. Sorted – Master Your Day ( -> FREE) – A task managing app gone free. Comes with Apple Watch app too!
18. Super Happy Fun Block ( -> FREE) – Check out an interesting puzzle game and save the humanity!

Fact: If you enjoyed the promos shared above, be aware that I often write about iOS app sales. Find out more by checking the App Store Deals – category!