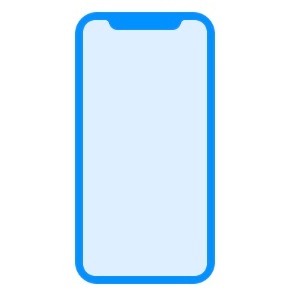 Around 1 month away from the expected presentation of the iPhone X we have the ‘official’ confirmation that the 10th iPhone generation will feature and edge-to-edged OLED display, with a revolutionary split Status Bar available at the top of the device. Thanks to Apple’s seeding to its paid Developers, of the HomePod firmware, an unreleased Apple gadget, introduced during WWDC 2017, we’re able to even show you a leaked icon of the iPhone X front facing design!

iOS developers have analyzed the HomePod’s firmware code and have uncovered an impressive amount of hints about upcoming iOS 11 and iPhone X features. The include the glyph shared nearby, which clearly pictures an iPhone with a new design that is almost bezel-free. The cutout at the top, which is the reason for the split Status Bar solution, includes the front facing camera, 3D sensors used for Face ID, speaker and other sensor usually embedded in the top area of an iPhone. 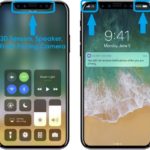 iPhone X Split Status Bar
Most likely the left side will continue to host the carrier signal, which by the way will revert to the bar-display in iOS 11 and ditch the dots that are occupying too much space.
The right side will continue to feature the battery percentage and various symbols like Bluetooth, Do Not Disturb, Portrait Orientation lock and so on.
Fact: It’s also highly likely that Apple will make the status bar interactive in order to be able to gain extra space in the two top corners of the screen. 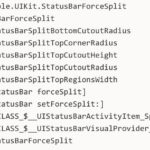 The edge-to-edge displays doesn’t leave any room for a physical Home button anymore. Most likely, Apple will embed it digitally within the OLED screen. However, the same HomePod firmware code digging did not provide any reference to Touch ID. We’re almost sure that the fingerprint reader won’t be available on board of the new iPhone. It’s functionality regarding iPhone unlocking and other type of authentication like log-ins and payment processing will be taken over by the Face ID feature!
Fact: Expect an on-screen indicator area at the bottom of the display too, that could include the digital Home Button, referred as Home Indicator, as well as other functions like time keeping and much more.

Tip: Check out all other new features coming in iOS 11 by reading our beta testing reviews.