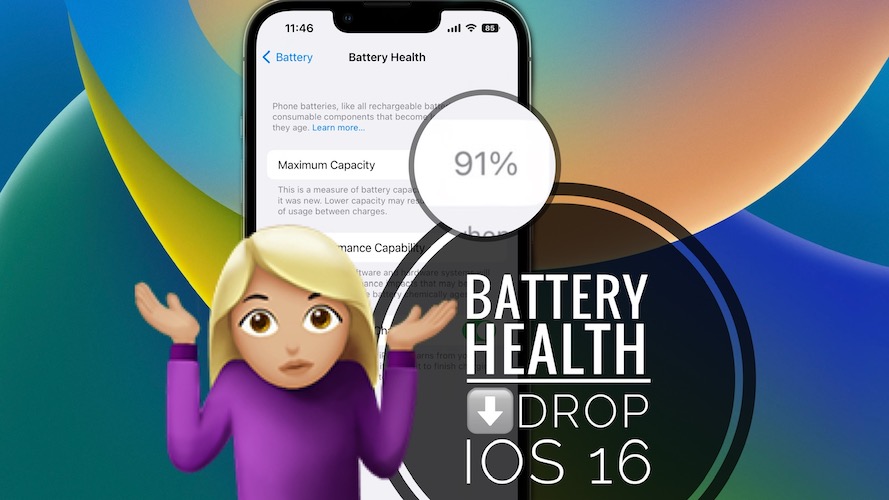 iPhone Battery Health dropped after iOS 16 update? Maximum Capacity wen’t down significantly since the new OS came out? Are you seeing huge drops of up to 7%? Check out what other users had to report and share your findings in the comments!

This unexpected behavior has been reported by Vanwilder:

“iPhone 13 pro battery health dropped from 96% to 91% since ios 16 update! Is this a bug? 16 seems like a big battery drainer! anyone else noticed the same?”

We can confirm similar drops on our own devices and have seen an even bigger one reported on Reddit:
iPhone 13 Pro Maximum Battery Capacity down from 100% to 93% after a few weeks of running iOS 16!

Are you experiencing the same? Share it in the comments please. Please detail if you noticed this drop right after the update or after a few weeks of usage.

We try to figure out if this is a normal decrease caused by an algorithm update, or if the iOS 16 battery draining issue is also negatively impacting the Maximum Capacity!

First, let’s agree that the Maximum Capacity tends to drop after a major iOS update, due to recalibrations. So, you might not be dealing with a problem.

However, if you experience a 2-4% drop right after the update and the Battery Health continues to drop after a few weeks on iOS 16, there might be reasons for concern.

The initial iOS 16 versions have been labeled as big battery drainers, with apps running too much in the background and new features like keyboard haptics and Always On Display requiring more energy than expected.

If you feel that iOS 16 is draining your device’s battery way too fast, you can still downgrade to iOS 15.7.

If you do, let us know if there’s any hike in the Battery Health value!

You can try to slow down further decrease of the iPhone Battery Health by disabling new features like keyboard haptics, AOD and even Lock Screen widgets like Weather and other apps that have been reported as significant battery drainers.

Help us determine if iOS 16 affects battery health more than usual, by sharing your Maximum Capacity readings before and after the update, in the comments section available below.

Example: My iPhone 13 Pro is currently showing a Maximum Capacity of 91%. It’s been activated exactly one year ago. It was at 98% in June, before running iOS 16 beta versions all summer long. It dropped to 94% by the public release of iOS 16 and further to the current 91% one month later. What about yours?