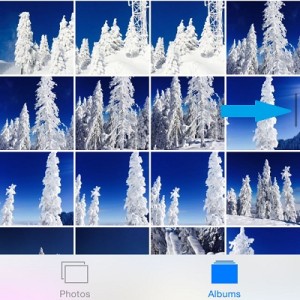 With the increasing storage space available on our portable Apple devices, it often happens that we find ourselves scrolling through thousands of images within Camera Roll. There’s a great risk of wasting several seconds to scroll all the way to the top or back to the bottom, while skimming for an old photo. However, here is an iOS trick that will save you some trouble.

You can always scroll towards the bottom of the Photos app, in an instant, by taping the appropriate Albums or Photos icon available in the footer of your Camera Roll screen. The same gig works if you wish to navigate within a split second towards the top of the pictures list. Simply, tap the upper edge of your iPhone’s screen and the scrollbar will race towards the top! 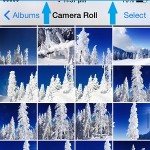 How To Scroll To Top In Photos
Whenever your browse your photos and wish to jump to the top of the list, tap on the highlighted area in the nearby image and the scrollbar will fast forward upwards and display your oldest photos.
This trick works within the native Photos app, in both Albums and Photos view.
Please distinguish taping from swiping, because even the smallest swipe will activate the Notification Center and not the scrolling shortcut.

Tap To Scroll Works For Third Party Apps Too 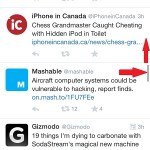 This trick works also while browsing third party apps like Twitter or Facebook and even when browsing Safari. A single tap in the header area is enough to instantly scroll up between Tweets and reach the most recent one. The same goes for your Timeline or News Feed displays on FB.
However, you do need two taps to instantly move the scrollbar at the top of a web page, while browsing via Safari. A single tap in the upper part of your iPhone’s screen will highlight the address bar, but your iOS device will figure out that you wish to scroll, if you quickly add a second tap. 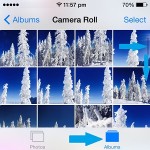 There is also a handy option to rapidly scroll down. But this one is only available for the built-in Photos app. While in Camera Roll, simply tap on the Albums icon, situated at the bottom of the screen, if you are in the Albums view! Else, tap on Photos if your screen displays the Photos view. The pictures will rapidly unfold towards the bottom.
To have your iPhone Albums and Photos properly organized and avoid scrolling through thousands of images, you can use the iOS favorites feature and store your most important pictures in the Favorites album. You can also consider creating a new album whenever you snap multiple photos for a certain occasion.

3 Responses to iPhone Tap To Scroll To Top/Bottom Trick