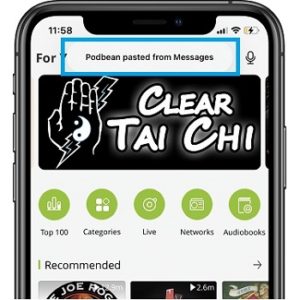 iOS 14 is highly privacy-oriented and adds many new features and enhancements that allow you to protect your sensitive data. One of them generates a new type of slide-in banner notifications whenever an app copies from the clipboard. This way you might discover apps sniffing in your clipboard even though you wouldn’t expect them to need the information.

What’s The iOS Clipboard? you might ask. It’s a virtual memory location that’s able to temporarily store data from an app to be able to transfer it to another app or in another location within the same app. For example when you perform a copy / paste action for a text from Safari to Messages, the chunk of text is stored in the iOS clipboard along the way.

The story behind the iOS 14 ‘pasted from clipboard’ notifications started earlier this year when two researchers Talal Haj Bakry and Tommy Mysk revealed that many popular iOS apps are abusing the content of the pasteboard without the consent of the users. Considering that sensitive data such as passwords could also be copied to the clipboard and spied by abusing apps, has lead Apple to tackle this problem.

When Are Notifications Generated?

The Cupertino-based tech giant has reacted quickly and has added these new notifications to the upcoming iOS 14 software update. The iOS 14 beta testing phase has already shamed numerous app developers that have removed the unwanted clipboard snooping behavior.
The pasted from banner notifications are generated as the name says, when an app or widget reads text from the pasteboard.

How To Disable Pasted From Clipboard Notifications

Although everyone loves privacy and this new feature is highly useful. The problem is that, at the time of writing, the ‘pasted from clipboard’ banner notifications are generated literally every time a paste operation happens. This can become annoying especially after you vetted most of your apps.
There’s currently no setting that allows you turn the banners off, by allowing a given app permissions to access your clipboard. Most likely, an option will be added by the public release of iOS 14 or soon after.

Paste From Clipboard – Yes Or No?

+ Lots of popular iOS applications read the pasteboard proactively to be able to provide a smart suggestion. For example, an app’s client can check if you copied a certain link to the clipboard to be able to suggest you to open the specific app.
– On the other side of the coin there are many apps that use ad networks that intentionally spy the iOS pasteboard to track your interest and display targeted ads.

Conclusion: In the majority of cases most apps that are accessing your clipboard are trying to improve the user-experience. Another example can be provided for text editing apps that pre-fill documents with content from the iOS clipboard.

What do you think about this new iOS 14 pasted from clipboard banner alert? Do you want to be able to turn the notifications off? Let us know by using the comments section available below.

Related: As mentioned at the beginning of this article, iOS 14 has a big focus on privacy. Besides the [app name] pasted from clipboard notification, you can also disable Precise Location permission for apps that require your location, decide if you want to allow apps access to your local network, allow apps only access to Select Photos and know whenever an app is actively using your iPhone Camera or microphone, by noticing the orange and green dot indicators in the iOS status bar!

61 Responses to The iOS 14 Pasted From Clipboard Banner Notification