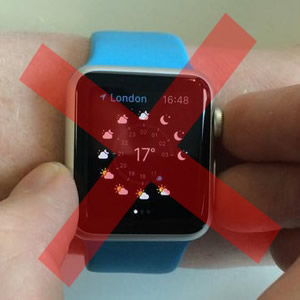 Ever since we upgraded to watchOS 2, we’ve unsuccessfully tried to print-screen the Apple Watch display to extract media and exemplify all new changes and updates to our readers. However, it seems that the classic way of screenshotting the Apple Watch doesn’t work anymore. Whether this feature was intentionally tweaked by Apple, or it’s an important watchOS 2 bug is unclear yet!

However, numerous inquiries from our readers signaling the same issue point out that the screen capture issue, could be an unwanted flaw of this new version. We’ve carefully read the watchOS 2 full update log and couldn’t find any update related to the print-screen feature. More, we’ve also tried to reboot Apple Watch and its paired iPhone, without any improvement. Did you encounter the same issue? Have you found a new way for print-screening the wearable?

Update: It seems that the majority of users reporting this issue have their Apple Watch paired to the iPhone 5, 5C and 5S models. Screenshots on Watches paired with iPhone 6 or newer aren’t affected!

Solution: Unpair and re-pair Apple Watch with its iOS companion and the print-screen feature will be resurrected. Don’t worry about losing data because a backup is automatically saved on your iPhone and you can use it to restore the Apple Watch after re-pairing it!

How To Screenshot Apple Watch

Ever since the release of the wrist-worn gadget, print-screening was available with an iPhone-like button combination. If capturing a screenshot on the iOS device is made by simultaneously pressing the Home and the Power buttons, the Apple Watch required a combo of Side button and Digital Crown presses. Nevertheless, when the trick is applied on a device running watchOS 2, nothing happens. If you insist on pressing the two buttons you end up with an Apple Watch force restart.

Fact: The watchOS 2 release was initially scheduled for September 16, but was delayed for 5 days because of an important bug. We’ve inquired Apple about this print-screen flaw and will update this article whenever we get a reply, regarding this issue! Stay tuned.