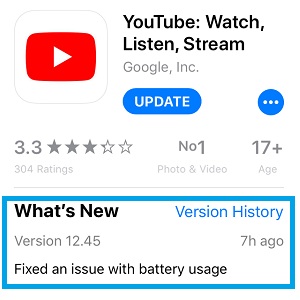 It’s finally here! After several weeks since iOS users all around the world complained that the YouTube app is dramatically draining their gadget’s battery, even when the software isn’t actively used, the world no. 1 video-sharing website has seeded a new software version available that promises to fix this issue. It all started when YouTube updated its iOS app with support for the iPhone X, Apple’s first edge-to-edge OLED smartphone.

Version 12.43 also included the ‘pinch to zoom’ gesture for the iPhone X’s full-screen mode, but sadly that wasn’t all. A bug found its way in the new firmware and caused the update to bring more harm than good. We’ve seen devices lose up to 40% of battery percentage in less than 1 hour, which is abnormal. Many of us had to simply delete the YouTube app from our iPhone in order to be able to obtain normal battery uptime and used the Tubex app as a temporary replacement! 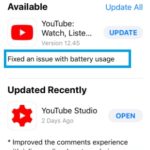 YouTube Software Update With Battery Bug Fix
Version 12.45 fixes “an issue with battery usage”, as YouTube claims in the new firmware release note. We just updated to this new version and are currently testing out to see if the intensive power draining has been truly fixed. In the meantime, we advise you to upgrade or re-install the YouTube app on your iOS device by tapping here.