Are AirPods Worth It? 98% Of Customers Said: Yes! 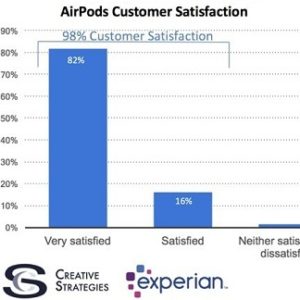 The wireless Earbuds released in the fall of 2016 have been one of the most controversial Apple product launches in the past few years, simply because paying $159 for a pair of Bluetooth earphones was considered by many an extravagance. However, diehard Apple fans couldn’t withstand the temptation of getting their hands on the AirPods and bought them in numbers. In fact, the revolutionary earbuds are still hard to find in stores nowadays too, more than half a year after they first reached the store shelves. Orders placed today will be delivered only within 6 weeks, unless you’re ready to pay extra and purchase them from third party sellers like Amazon.

This indicates that the AirPods are a great iPhone accessory and those that initially refrained from purchasing them because of the price are now starting to acquire them, after reading the positive reviews. This trend has just been confirmed a few days ago, as Experian and Creative Strategies rolled out a survey that confirmed a 98% customer satisfaction rate among AirPods owners. This is the highest ever poll result obtained for a new Apple product, confirming that the wire-free earbuds are a quality first generation accessory. 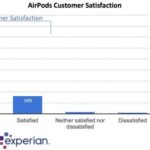 A detailed view at the above mentioned survey shows that 82% of respondents declared themselves as “very satisfied”, while 16% are “satisfied” by Apple’s Bluetooth earbuds. The poll interrogated around 1000 AirPod owners. The iPhone scored a 92% satisfaction rate back in 2007 when the first generation was launched, while the iPad had the same results in 2010. The AirPods managed to improve the Apple Watch‘s record that was rated at 97% back in 2015. 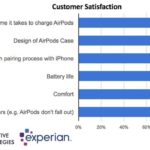 + According to the same study users are mainly satisfied by the convenience of a wire-free experience when wearing the new earbuds.
+ The easy pairing process is certainly an important plus for customer satisfaction
+ The fast 15-minute time frame used for charging the gadget is also greatly appreciated by owners as well as the battery life.
+ Great sound quality.
– One of the mentioned negatives is the fit of the earbuds. Considering that human ears have various shapes and sizes it’s normal that there’s a percentage of users that will give negative points in this category.
– There have been cases when connectivity was sometimes problematic but this is normal for a first gen product

Tip: Do you know that you can find lost earbuds with the help of the Find my AirPods feature, available starting with iOS 10.3?