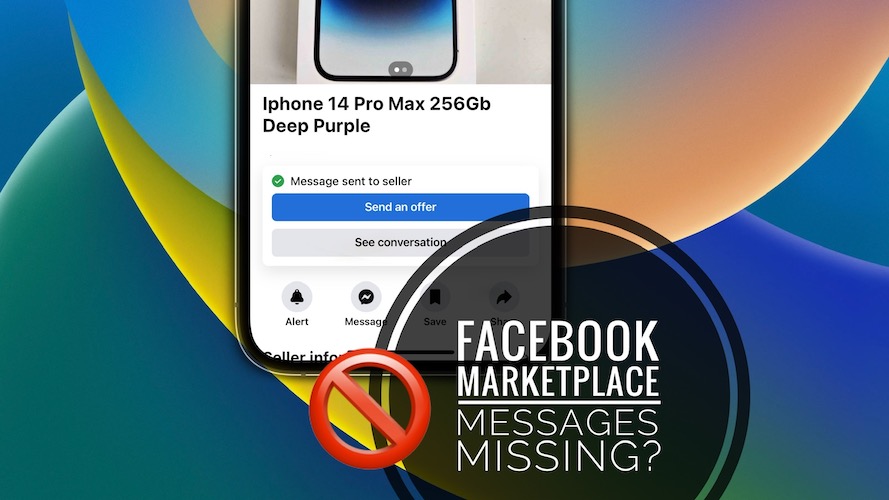 Are Facebook Marketplace messages not showing up after updating iPhone to iOS 16.1.1? Chats are missing from Facebook Messenger app and you can’t contact sellers and buyers on the Marketplace? You’re not the only one!

This issue has been reported by Carol (iPhone 13 Pro):

“I installed the new update and Messenger says I have a message but a screen comes up that says no Messages. New messages will not appear here. I do see them on my computer.”

This FB marketplace messages problem has been also confirmed by Michael:

“My phone updated to the new update yesterday to 16.1.1 and now my Facebook marketplace messages don’t show. I guess I should stop my ipad from installing update, because it still works.”

“I don’t know what is going on but on my iPhone running iOS 16.1.1, all markeplace messages are not viewable on the messenger app anymore. The only way to read messages is through the Facebook app.”

This seems to be an iOS 16.1.1 specific issue. Android devices aren’t experiencing the problem and neither do other iPadOS devices that haven’t been updated to the latest version.

Until a fix is issued via software update, you can try the following troubleshooting steps:

First, you should try to reinstall Facebook and FB Messenger apps. This will ensure that your device is running the latest version available:

If the above did not help, you should proceed with complete removal of the two apps from your iPhone / iPad:
Touch & hold their icons on the Home Screen or within the App Library and go for Delete App.
Redownload and install the apps from the App Store: Facebook (direct link), Facebook Messenger (direct link).

Apparently, you can also use the Facebook app to get the messages. There are two options:

Credits: Thanks Mhigashi for the workaround.

Last but not least, if this issue is annoying you that bad, you can still revert to iOS 16.1. A step-by-step tutorial is available here.

Have you managed to fix Facebook Marketplace messages missing in Messenger app? Do you have a batter solution or other issues to report? Share your feedback in the comments!

16 Responses to Facebook Marketplace Messages Not Showing Up? (iOS 16.1.1)