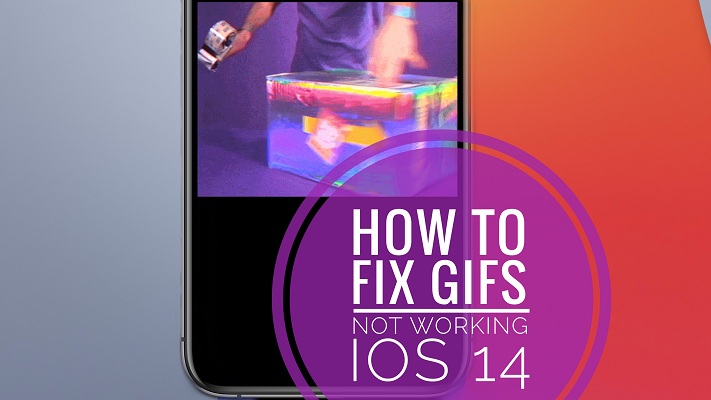 GIF not playing on iPhone

Are GIFs on your iPhone not working, or you’re unable to save them since updating your device to iOS 14? This is a common problem reported by many iPhone and iPad users. Instead of saving the animated image that plays as a very-short video, your browser downloads only a frame of the GIF. The image is available in the Photos app but can’t be played.

How To Fix GIFs Not Working In iOS 14

iPhones are definitely able to save and play GIF’s in iOS 14. However, there are various causes why GIFs are saved as still images. Most of them and their appropriate fixes are listed below:

We’ve noticed that the Google Chrome browser fails most often to save GIFs and will instead only download a still image from the animated photo. In iOS 14, users are able to set Chrome as default iPhone browser.
Fix: So if you’re having problems with downloading GIF’s make sure that you’re using the Safari browser, before you proceed to the next step! 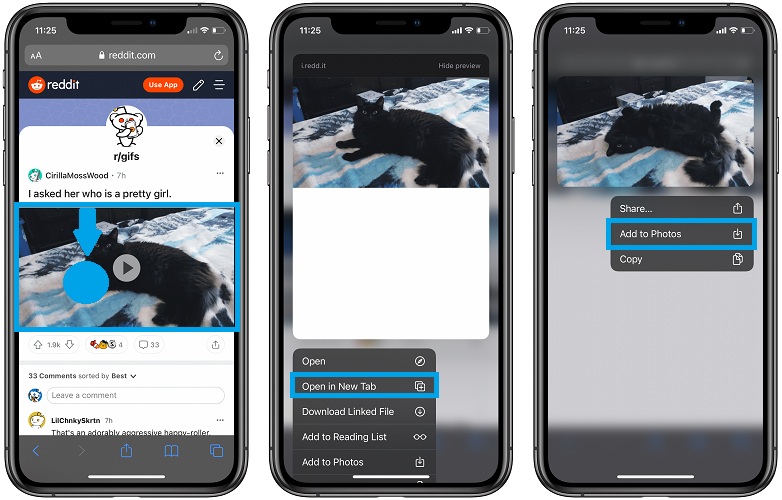 If you browse a GIF via Safari, you might not be able to save it on your iPhone unless you open it in a new tab. Website embed the animated images natively or via a third-party platform. Every hosting company has it’s own system. To maximize your changes of saving a GIF and not a still image open the GIF in an new Safari tab before downloading it.
How To: Long-press on the GIF image and use the ‘Open in New Tab‘ option. Next, press firmly again and use the ‘Add to Photos‘ option to save the GIF on your iPhone or iPad.

If Safari on your iPhone / iPad is also unable to save GIFs, you might wanna tweak the following iCloud setting: 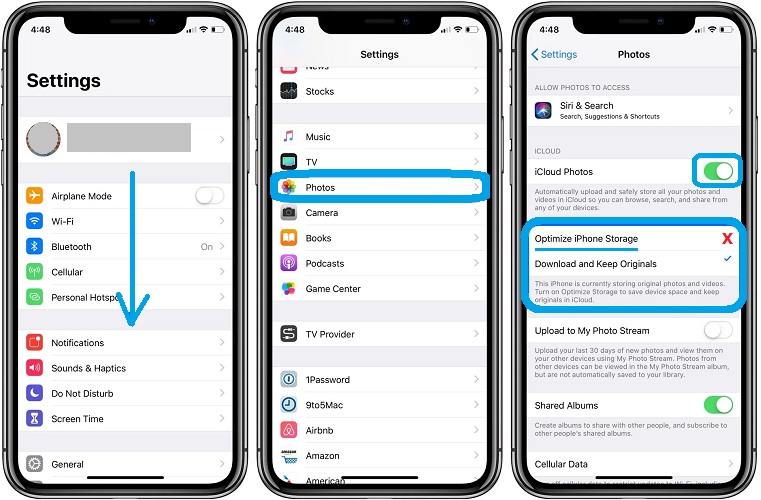 Fact: It stores original photos and videos on iCloud and just keeps a thumbnail version of your file on your iPhone to free up storage. This could be one of the causes why GIFs won’t play on your device.

At the opposite end, an user on Apple’s discussions forums claims that he noticed that iOS 14 will stop saving GIFs if iPhone storage is low. So, a potential fix requires you to free up additional space on your device, to be able to download GIFs again.

GIFs are available online in various ways. Some are directly uploaded to a website, while others are embedded via third-party GIF hosting applications like Gyfcat, Imgur and more.
At the time of writing GIFs that are updated via third-party apps can’t be downloaded even via Safari.

Fix: However if you download the GIF hosting platform’s iOS app, from the App Store, you will be able to open the GIFs via the app and easily copy and paste them on your favorite sharing channels!

Many sites are switching for the new .webp format that it’s now also supported by iOS 14. It appears, that the Photos app isn’t able to properly display the .webp images and only shows a still frame instead of the animation.
If this is the case, there’s not much that you can do.
Tip: Make sure that you update your device to the latest iOS 14 version to get the best chances of successfully saving a GIF!

Have you manged to fix GIFs not playing on your iPhone in iOS 14? Did one of the above tips help you out? Share your feedback! Use the comments section and let us know which one.

Related: Do you know that you can hide the Hidden album in iOS 14?