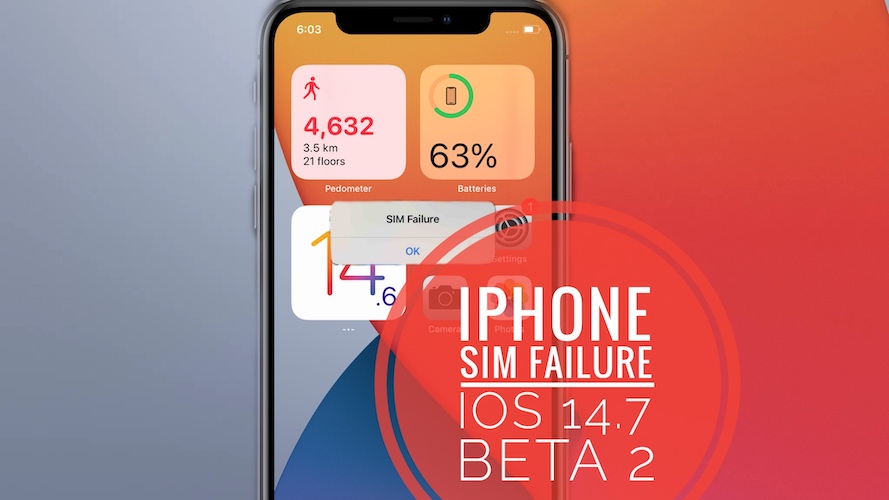 s your iPhone displaying a SIM Failure notification and your device is not able to get any carrier coverage? You most likely just finished installing the iOS 14.7 Developer Beta 2 update and have been prompted with this shocking dialog box! You’re not alone. A series of users are reporting the same SIM Failure warning!

No carrier connectivity means that you can’t receive or dial cellular calls or text. Your iPhone is able to connect to WiFi and you can engage in VoIP calls like FaceTime, or WhatsApp, Skype or similar video calls, but that’s not enough in most cases.

Unfortunately, there is not much that you can do about this. It’s a software related glitch and your only option is to downgrade back to iOS 14.6.

How To: To downgrade iPhone software from iOS 14.7 Beta 2 to iOS 14.6 you have to perform the following steps:

Tutorial: For a step-by-step guide about downgrading your iOS version please read here.

If downgrading isn’t an option and you’ve installed the iOS 14.7 Developer Beta 2 on a secondary device, you can continue to use it with a Wi-Fi connection only and be patient until Apple rolls out a new beta version with a patch for this bug!
Fact: Bookmark and follow us on social media as we will update the website as soon as iOS 14.7 Developer Beta 3 becomes available!

If you are fortunate enough to read this article before installing iOS 14.7 Dev Beta 2, you can stop the update, if it’s just downloaded and you did not tap on Install Now.

Is your iPhone also affected by the SIM failure bug in iOS 14.7 Developer Beta 2? Is this happening with your physical SIM card or an eSIM? Did you manage to downgrade? Have you found a better fix? Are we missing something? Use the comments section available below and share your feedback!

Related: iOS 14.7 could be the last important software update for iPhone before the public release of iOS 15.