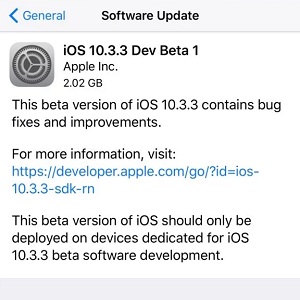 As expected, although the introduction of the upcoming Apple OS versions is only about three weeks away the current versions are continuing to be developed, even after Monday’s batch of Software Updates for all kinds of Apple fans. The iPhone and iPad got iOS 10.3.2 that focuses on security improvements and minor bug fixes. The Apple Watch now runs on watchOS 3.2.2, a minor update with under-the-hood changes, while the 4th generation Apple TV and all Mac computers have also received their respective software updates.

One day later, the Cupertino-located tech giant has already seeded a fresh new batch of Developer Betas for the upcoming software versions: iOS 10.3.3, watchOS 3.2.2, tvOS 10.2.2 and macOS Sierra 10.12.6. The initial test versions doesn’t seem to include any new features and you shouldn’t expect significant changes. All remaining updates from now on until this fall, when iOS 11, watchOS 4, tvOS 11 and macOS 11 are expected to go live to the general public, will most likely focus on bug fixes and security patches.

To test out the latest iPhone and iPad operating system version you have to download the iOS 10 Beta Profile on your device. To grab the profile you have to either be a registered and paying Apple Developer or use the tip provided below to bypass this requirement.
Yes, you can simply signup as an Apple developer just for the sake of downloading the first wave of beta versions but that will cost you $100 per year. Else, tap here and find out how to grab the iOS 10 Beta Profile from a third party website.
After installing the profile, open Settings, tap on General and access the Software Update menu. The iOS 10.3.3 Developers Beta 1 will pop up on your Software Update screen. Download and Install it as you do with any other regular update.

How To Upgrade To watchOS 3.2.3 Dev Beta 1
To install the latest Apple Watch operating system on your wrist-worn gadget you first need to update the paired iPhone as described above. Next, open the Apple Watch app on your iOS smartphone. In the My Watch tab, tap on General -> Software Update and wait until watchOS 3.2.3 Dev Beta 1 is discovered.
Tap Download and Install, agree with Apple’s terms and wait until the test software is installed on your Watch.

Fact: Be fully aware that test versions, especially Developer betas might come with serious glitches that could brick your device. It’s recommended to use a secondary test unit to try out these early versions!