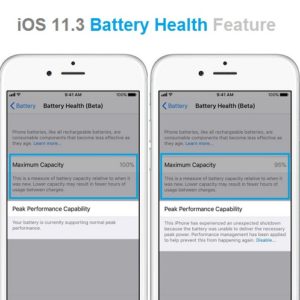 iOS 11.3 hasn’t been rolled out yet, but it’s slowly reaching the final beta testing stages. One of the new features that will be introduced by Apple, along this important software update, is the Battery Health info screen. This new submenu of the the Battery, Settings area has the role to inform the iPhone and iPad owner about the physical status of the device’s battery.

As you know, a battery is a consumable hardware of a smart device. While time passes and your iPhone ages the capacity of its battery to store power also decrease. The “Maximum Capacity” field in the Battery Health screen has the role to inform you about the actual strength of the battery. If the 100% value is displayed it means that the hardware is functioning as new. If the figure is smaller it means that the battery has started to wear out and your device is vulnerable to unexpected shutdowns, because the battery might not be able to cope anymore with the load and provide the peak power needed. 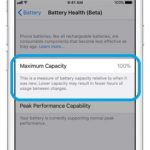 iPhone Battery Health Feature – Maximum Capacity
The Battery Health section has been surly added to dampen the annoyance caused by the hidden performance management trick used by Apple on older iPhone models, in order to prevent unexpected shutdowns. However, the company did not highlight this intentional performance throttling. A maneuver that many users considered it an unfair move to make them upgrade for a newer device. The situation can be easier solved with a battery replacement and Apple has decided to provide discounted prices for battery replacements of iPhones that are out of warranty, $29 instead of !

Fact: Don’t confuse the maximum capacity percentage with the real-time battery percentage indicator available in the top-right corner of the status bar, or in the Control Center view in case of the iPhone X! 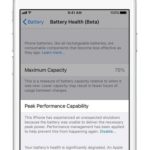 iOS 11.3 And Performance Management
Starting with this software update, performance management won’t be enabled by default anymore. The underclocking of your iPhone’s performance will kick in only if your device experiences an unexpected shutdown. Even then, you can choose to use it at its normal parameters and manually turn off the Performance Management option. Tap on the blue “Disable” link available in the Peak Performance Capability section. However, you have to be aware that unexpected turn offs will re-occur unless you bring your device to an Apple service or accept to use it at a lower intensity!