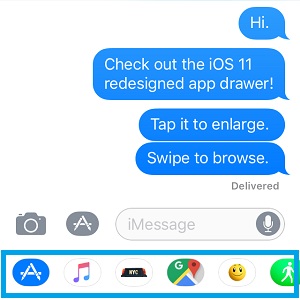 In the upcoming 11th iPhone and iPad Operating System version it will be more easier than ever to access the apps that you’ve installed in iMessages. As you might already know Apple has introduced iOS 11 to the world during the June 5 WWDC 2017 keynote and rolled out the first Developer Beta version a few hours later. Ever since we’re toying with it and sharing with you all the new features and changes.

The redesigned App Drawer of the Messages app is easily to spot. Whenever you open a conversation thread the new app menu is displayed by default at the bottom of the screen. It’s a horizontal slider the features all apps installed from the iMessage App Store. Swipe left and right to browse and select the one you want to use. This spares you from the previous two taps that where required in iOS 10 to open the apps section and list the app drawer as explained here. 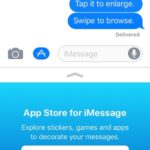 -> The new app menu debuts from left to right with the App Store button. Tap it and the official app market for iMessages open up. You’ll recognize the revamped iOS 11 App Store, that includes featured apps and other lists that promote popular stickers and other iMessage software.
-> Next inline in the app drawer are the apps, games and stickers that are already installed on your device. Tapping one of the icons opens up the expanded view of the app on the bottom-half of the screen’s real estate.
-> If you swipe-left all the way to the end you’ll find the More option. Tap it and you’ll be able to organize the apps listed in the drawer. Decide what software you want to show-up and which you want to hide with the help of the On/Off toggle. 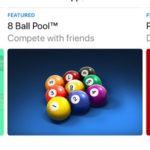 Fact: The app drawer is discretely displayed at the bottom of the Messages conversation screen. However, when you interact with it it grows-in to make access easier.

Tip: Tap the App Store icon, nearby the text input field to minimize the app drawer after you finish using it.

Hint: More changes come to Messages in iOS 11. One of them is the Apple Pay person-to-person money transfer feature!