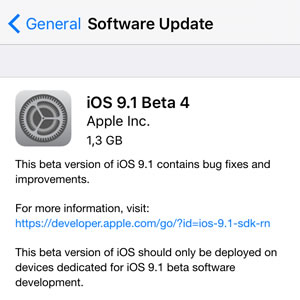 iOS 9.1 inches closer towards its general release, as the 4th public beta was seeded 24 hours ago. No major updates where added to this new test version. Various glitches, such as increased battery drainage and others specific touches, specific to a GM (Golden Masters) build. That’s the final beta release before the tested iOS version becomes available for download to the general public. If you’re into details iOS 9.1 Public Beta 4 has the build number 13B136.

This 4th iOS 9.1 beta comes exactly one week after Public Beta 3, which added a series of new wallpapers. iOS 9.1 Beta 2 came with the Show Contact Photos option for the iPhone 6 and later models, while the very first beta introduced a wide series of new smileys, including the middle finger emoji. Most likely, the first important iOS 9 update will come after the current 9.0.2 version that introduced the highly appreciated app thinning feature. 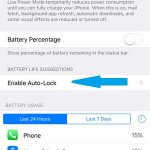 After one day of toying with this latest build we’ve noticed two visible changes:
1. Auto-Lock Setting: has been moved the the Battery options highlighting the importance of enabling this feature. You can choose between 30 seconds, 1, 2, 3, 4, 5, or 6 minutes and Never. The default selection is 1 Minute. The lower the time-frame the more battery you’ll save. If you wish to be most efficient, develop a habit of pressing the Sleep/Wake button, whenever you finish using your iPhone. This will lock your device and kill the display instantly, instead of waiting for 30 seconds.
2. Keyboard Design: The native iOS claviature has received minor edits to the Shift and Delete Keys. They’ve been fattened out and have now a better visibility.

If your iPhone already runs an earlier test version you can grab this new release via the Over-The-Air update system. Open the Settings app and browse to General -> Software Update. Let your iPhone search for the new build. Tap Download and Install and let your device to the task. Do mind that this firmware package is quite large. About 1.3 GB, which is another confirmation that it could be a final test before the general public launch.
Tip: In case you’re running iOS 9.0.2 or an earlier release you can install the beta via the Apple Developer Program (only with an active developer account). Else, follow the tips provided here. Do mind though that beta seeds are only recommended for test devices.